(or, how to put a brave face on a situation that actually isn’t that bad.)

The Coordinadora Democratica’s latest statement does throw some cold water, a bit, on those of us who were holding out for 4 million signatures.

3.6 million is the total, according to the opposition coalition.

The opposition failed to turn out as many people to sign as it will need to turn out to vote when a recall referendum does take place. (When, not if.) In fact, the referendum now looks likely to be agonizingly close.

[Embarassingly the CD’s arithmetic appears to be slightly off – if you add up their state by state numbers you get 3,612,411 votes…not the 3,602,051 they’re trumpeting as a headline figure! It’s the kind of snafu we expect from chavismo, but from you guys?! Come on! Aren’t you all supposed to be engineers?]

Up next: an arduous and hard-fought verification process, again with the Carter Center and the OAS acting as observers.

If chavismo manages to peel off, say, 10% of the signatures for one reason or another (e.g. mis-signed forms, double signings, and forms maliciously mis-signed by chavistas to give rise to fraud claims down the line) you might really looking at somewhere in the neighborhood of about 3.2 million valid signatures. More than enough for the object at hand legally speaking, (legally, 2.4 million sigs is what they needed) but visibly not enough to recall Chavez.

Now, this will dampen spirits in the opposition, but only to a certain extent. Even a 3.2 million figure would signal the failure of the government’s extensive campaign to scare people into not signing. This is an important and well documented reality, and one the government hasn’t even bothered to conceal, really.

Now, I understand the notion of a government holding hundreds of thousands of public sector jobs hostage for its own petty political reasons may strange to first world readers. Again, this is the sort of thing we’re getting at when we say Chavez is destroying Venezuelan democracy.

Check out this pretty picture, taken in Paraguana Peninsula, and marvel at its subtlety. The sign is posted just outside the world’s largest oil refining complex, Amuay-Cardon, which employs thousands of public sector oil industry workers: 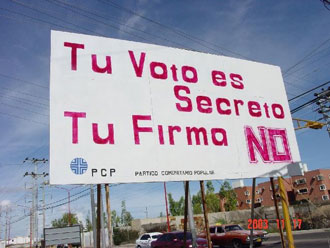 [Thanks to Devil’s Poop for the photo.]

Translation: Your vote is secret, your signature isn’t.

Signs like this one were posted in many parts of the country.

This was the simple, obscene slogan adopted by the regime in the weeks leading up to the signature gathering drive. “If you sign, we’ll know about it, and we’ll fire your ass.” Lovely! Such revolutionary fervor, such earnest idealism! Wouldn’t you just like to read a column by Mark Weisbrot or Ignacio Ramonet explaining the philosophical/ideological import of this heart warming new revolutionary doctrine? It’d be great fun! Doing the memory of Salvador Allende proud with these shenanigans, aren’t we?

(Flight of Fancy: Just imagine the gasket Allende would have blown if he heard of such tactics being used on his behalf! There, in a nutshell, is the difference between integrity and no integrity.)

This kind of intimidation was, by all reports, widespread. Notice the crudely painted PDVSA logo and the acronym on the sign – PCP. No, it’s not the drug this particular fanatic was taking when devising the slongan and painting the sign. It’s Prevencion y Control de Perdidas, PDVSA’s internal security force – a kind of corporate police force. It does not take a genius to put two and two together and understand what is at stake here. (In many cases I’ve heard of anecdotally, the threats were verbal, direct, and explicit.)

It didn’t work. They really thought if they could take out those 1.2 million state workers (and their spouses, children, parents, anyone who could be linked with them and threatened in a subsidiary way), they could keep the opposition from reaching 2.4 million signatures at all. The strategy just didn’t pan out at all.

Think about that sign, think about the attitude reveals, as you read your newspaper stories on the opposition’s 3.6 million signatures. “The state is our play thing,” is the message. As a government that really does consider itself revolutionary, chavismo can conceive on no separation between State and Government. If they can control it, they’ll leverage it for political advantage. How, I ask you, can democratic and pluralistic co-existence take place in this kind of environment? It can’t!

So, ask yourself how many state workers will have wanted to sign, but did not dare, because they realized that their signatures would be public domain. In some ways, the headline should actually read “the opposition received 3.6 million signatures, despite the fact that 1.2 million of its key constituents were under explicit threat of serious personal hardship if they signed.”

Not surprisingly, anger within the civil administration at these sorts of shenanigans has been in crescendo for a long time. To add insult to injury, many state workers have been going unpaid for months at a time due to government cash-flow problems even at a time of particularly high oil prices, when the state should be flush with cash. Many now find themselves in the somewhat surreal position of being threatened with dismissal from their very demanding jobs, even though those jobs often come with no regular pay checks attached to them or anything like that. This, this will do wonders for worker morale!

It’s easy to be flip about it, but quite wrong. It’s a really dreadful situation these people are in. Talk to the obstetricians or the nurses at the Concepcion Palacios maternity hospital for details on the life of the unpaid Venezuelan state worker.

Let’s be clear about one thing: this “your vote is secret but your signature isn’t” bidness is a two-edged sword. When the referendum actually is held, state workers’ votes actually will be secret. How many state sector workers who were too scared to sign this time will turn out to vote the rascal out of office when his downfall looks imminent? 300,000? Out of 1.2 million state workers? That may be all we need.

(I won’t go into the chavista allegations of opposition fraud because by and large, they’re plainly laughable. While some of the complaints might be valid, the main rhetorical lines coming from Comando Ayacucho are so transparently illogical it would be a waste of my (admittedly not very limited, these days) time to debunk them.)

(or, trying to forecast what Chavez will do: the ultimate mutt’s game!)

How this will play out more broadly is always hard to forecast, if for no other reason than that Hugo Chavez is famously unpredictable. So, sure, it’s fruitless speculation, but that’s never stopped me before! Here goes…

Sure, my corazoncito escualido is disappointed that we did not to reach those 4M signatures. However, from the point of view of stability, this is a good thing, not a bad thing. As my sister Cristina perceptively notes, if there were 4M signatures, the opposition extremists would already be out calling for massive street demonstrations to demand Chavez’s immediate resignation, which would be a disaster for stability.

Now that the opposition looks to be several hundred thousand votes short of the magic number (3,757,773 votes), Chavez will not feel so cornered. He could well argue that the opposition still has never recorded the level of support the revolution has recorded. Technically, he’s right.

In those circumstances, he might even accept a referendum and work to win it, rather than working to maliciously torpedo it as was his initial reaction. If he plays his hand well, he could conceivably win, and be safely anchored in power until 2007 at least.

On the other hand, the consequences of refusing to play at all would be so grave, and so unpredictable, that Chavez might well calculate he has a better chance to remain in power if he faces the voters.

This would be tremendously healthy for Venezuelan democracy, or what is left of it. Of course Chavez in the middle of an election campaign is never an edifying spectacle, but it would certainly be preferable to have him within the democratic tent pissing out than the proverbial inverse. Certainly, a campaign of all out obstructionism on the part of the government could prove tremendously damaging. With Chavez, you can never tell.

(or, how to waste time with excel)

One interpretation of all of this is that Juan Forero was right all along (durn, I hate to admit that – obnoxiously, it’s not the first time.) The referendum will be no cakewalk for the opposition. Turnout will be the key – and the government’s decision on whether to campaign for a no vote or for people to abstain will be of key importance.

If you can handle just a little more math, I’ll illustrate the turnout connundrum.

In 1998-2000 turnout in Venezuela hovered around 55-60%. But as recently as the late 80s it was over 90%. Given the historical weight of this election, it is hard to imagine turnout being anything but high. Meanwhile, since the middle of 2001, opinion polls conducted by a wide variety of Venezuelan and foreign firms have thrown up a quite stable pattern – “If a referendum was held tomorrow would you vote to recall president Chavez?” has been garnering 60-66% yes responses for two years now.

So what are some scenarios?

In Venezuela, we have precisely 12,012,118 voters. Lets look at both the low and high ranges of the polling spectrum.

On the conservative side, if the opposition can get just a 50% turnout for the referendum – that is just over 6 million voters – and 60% of those who turnout give them their support, this would give them 3.6 million votes – the total they got this weekend.

The math is actually very simple:

But if they manage to just nudge up turnout to 55% of the electorate, and they could remain at that 60% level of support they would have 3.96 million votes in the bag:

If things go well, and they can go towards the top end of their polling range (66%) and can mobilize above the odds turnout (63%), we would be looking at just about five million recall votes – a crushing number.

Finally, as a thought exercise, try this:

(It may seem odd that by matching both the turnout and support Chavez had 2 years ago, the opposition gets move votes than Chavez did then. The reason is twofold: the electoral roll is about 300,000 voters larger this time around, due to newly registered voters. Secondly, spoiled ballots are much less likely in a simply Yes/No referendum than in a complex presidential vote. In 2000, incidentally, an alarming 5.3% of ballots were spoiled – almost 350,000 of them – which sparked many suspicions of fraud back then. But just think, a mere 160,000 of those spoiled ballots would put the opposition over the top of the magic number!)

Punchline: if the opposition manages to maintain its 2-year support trend (60-66%,) and can match or exceed the 2000 turnout (which was historically low for Venezuela) there will be enough votes to revoke Chavez.

Everything hangs on the turnout. And the turnout will hang on a combination of citizen bravery in the face of government intimidation, and the opposition’s ability to put out a possitive, inclusive message that motivates people who feel excluded to come forward and participate in the democratic process. It really could go either way.