The CNE verification roller-coaster saga continues, a rapid-fire alternation of seemingly dreadful news and, now and then, heady optimism. Today, at least, the news is good.

It took just 48 hours for Jimmy Carter, who commands unique respect across the political spectrum in Venezuela, to personally broker a sensible compromise that nearly all sides can live with. 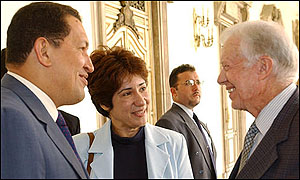 Almost all the stakeholders are reading from the same hymn book now – itself a fantastic achievement. Now that all sides have agreed that Carter Center/OAS observers should be granted broad access to every part of the signature verification process, it only makes sense for all sides to pledge to accept CNE’s eventual decision, whatever it may be.

The only question now is why Accion Democratica insists on holding the opposition as a whole back from undertaking this tremendously significant commitment.

As for the politics of all of this, I think Miguel over on Devil’s Poop has it about right when he writes,

I have believed for quite a while that Chavez’s strategy is simply to proceed forward and go to the recall referendum. He believes that the magic number of 3.8 million votes by the opposition simply will not be reached as most Venezuelans are apathetic about the whole conflict. He may be right in his assessment. I never cease to remind people that in the heyday of his popularity Hugo Chavez never received more than 3.757 million votes. He was really popular among those that voted, but abstention was 43.7% of the registered population. A repeat of that, adding a bit of ‘Misiones’, some doses of populism, some threats and the number may not be reached. However, this also implies that Hugo Chavez may not get more than 2.4 million votes in his favor, severely damaging the President’s image. Abstention will in fact be the deciding factor, if it is near 50% the recall fails assuming the 60%-40% split against Chavez polls indicate. If it is near 40% the recall is successful.

Andy Webb-Vidal’s FT piece, comes to the same conclusion after alluding to (but not quite giving us) fresh poll data “suggesting that the opposition’s chances of unseating Mr Chavez at the ballot box have collapsed, while he continues to enjoy a steady 35 to 40 per cent backing – which could be enough to save him.”

Of course, in the end you can get that Excel spreadsheet to toss back any result you want. It all comes down to turnout, and that, by nature, is unpredictable.

In the same piece, Andy dishes some delicious inside nuggets into the murky world of opposition decision-making, and reports Manuel Cova is quickly becoming a consensus candidate for key parts of the opposition, specifically the TV station owners – who, like it or not, have a big say in the matter.

Knowing how the four horsemen operate, they’ve probably focus grouped and polled the hell out of this decision. It’s not surprising Cova would come out on top: he’s black, working class, and frighteningly bright and eloquent. His judgement as post-Ortega head of the Labor Movement has not always been perfect, but it’s been far better than what came before. And I’m sure they see him as a safe pair of hands.

Yes, he’s an adeco at heart, but I very much doubt a President Cova would take orders from AD’s CEN. To be frank, I think we could find much worse consensus candidates than Cova – and if they play it right, he could play a big role in boosting turnout to a recall vote.