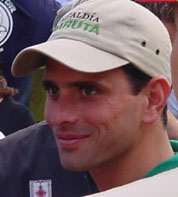 One by one, the government crosses the “yellow lines” that differentiate democracies from dictatorships. Now, the regime has decided to throw my mayor in jail. Henrique Capriles is the only politician I’ve ever voted for who’s actually won! And, big surprise, the acting prosecutor in the case is our beloved Danilo Anderson, “environmental crimes” “prosecutor.”

What angers me most is the shamelessness of Anderson’s lies. The prosecution claimed Capriles has to be jailed because he’s “at high risk for flight.” But can anyone imagine an occupation that puts a suspect at a lower risk from fleeing than “mayor”? It’s aggressively non-sensical, and that, of course is the whole point. Absolute power doesn’t need to justify itself.