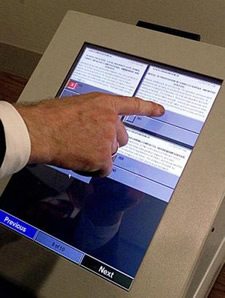 AP: Electronic voting: Can computers ever be trusted?
A growing number of federal and state legislators are expressing doubts about the integrity of the ATM-like electronic voting machines that at least 50 million Americans will use to cast their ballots in November.Computer scientists have long criticized the so-called touchscreen machines as not being much more reliable than home computers, which can crash, malfunction and fall prey to hackers and viruses.

Now, a series of failures in primaries across the nation has shaken confidence in the technology installed at thousands of precincts. Despite reassurances from the machines? makers, at least 20 states have introduced legislation requiring a paper record of every vote cast.


AP: Eyeing Electronic Voting Security
Concerned about the reliability of electronic voting, a federal panel is examining ways to safeguard polling from hackers and bad software to avoid another disputed presidential election this November. The first public hearing Wednesday by the U.S. Election Assistance Commission comes as many states consider legislation to require a paper record of every vote cast as a backup to technology they consider potentially faulty or vulnerable to malicious attack.


AP: Tiny new agency ill-equipped for e-voting oversight
As alarm mounts over the integrity of the ATM-like voting machines 50 million Americans will use in the November election, a new federal agency has begun scrutinizing how to safeguard electronic polling from fraud, hackers and faulty software. But the tiny U.S. Election Assistance Commission says it is so woefully underfunded that it can’t be expected to forestall widespread voting machine problems, which would cast doubt on the election’s integrity. The commission — which on Wednesday conducts the first federal hearing on the security and reliability of electronic voting — laments its predicament in a new report.


San Jose Mercury News: Lax controls over e-voting testing labs
Forty-two states, including California, rely on three independent testing labs to safeguard elections. By holding voting-equipment manufacturers accountable to national standards and keeping copies of software programs in escrow, the independent labs are supposed to help stop defective computer code from reaching the polling place. But critics contend that the labs are too close to the elections industry to serve as effective watchdogs. “The only thing they are independent from is state and federal regulators,” Shelley told the U.S. Election Assistance Commission this month.


New York Times OpEd: Who Tests Voting Machines?
Whenever questions are raised about the reliability of electronic voting machines, election officials have a ready response: independent testing. There is nothing to worry about, they insist, because the software has been painstakingly reviewed by independent testing authorities to make sure it is accurate and honest, and then certified by state election officials. But this process is riddled with problems, including conflicts of interest and a disturbing lack of transparency. Voters should demand reform, and they should also keep demanding, as a growing number of Americans are, a voter-verified paper record of their vote.


New York Times: Demand Grows to Require Paper Trails for Electronic Votes
But in the last year election analysts have documented so many malfunctions, including the disappearance of names from the ballot, and computer experts have shown that the machines are so vulnerable to hackers, that critics have organized to counter the rush toward touch screens with a move to require paper trails. Such trails – ballot receipts – would let voters verify that they had cast their votes as they intended and let election officials conduct recounts in close races.