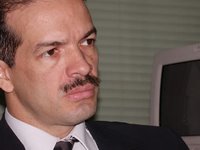 It all started on the evening of November 18th, 2004 when this prosecutor, Danilo Anderson, got blown up. Guy gets into his SUV, the thing explodes, his body is instantly incinerated.

This was a big shock for everyone. I mean, Venezuela is not Colombia, political assasinations are very rare. So people were really stunned when this happened.

Thing is, Anderson was not just any old prosecutor. The guy had been assigned a series of very high profile, highly politically sensitive cases. For sure he was seen as a chavista, and his investigations were suspiciously consistent in always implicating government critics and always exonerating government supporters. 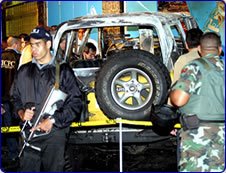 “So the opposition had him killed,” you might be thinking.

Well, it sure looked that way at first. Obviously, that was the chavista line. The government made a huge to do about it. The guy was mourned on the floor of the National Assembly. He was decorated post-mortem. Congressmen cried, ministers demanded justice, the prosecutor general vowed to leave no stone unturned in flushing out the evil oppositionists who did it. He became the first bona fide chavista martyr, a rallying cry for the government, definitive proof of how evil and twisted their opponents were.

So far, so good: a nice, neat narrative of opposition evil-doing. But soon, elements started coming out that didn’t quite seem to fit in with that story-line.

Two days after the murder, two former cops disappeared off the streets, only to turn up a week later, almost naked and apparently drugged, wandering in the streets of Valencia. The two are brothers, Rolando and Otoniel Guevara, and they claim they were tortured by Disip – Venezuela’s secret police. The government blamed them for carrying out the crime. Their cousin Juan Guevara, another former cop, was later implicated in the murder as well. The three were eventually convicted of carrying out the hit and sentenced to long sentences, though the evidence against them was spotty – there was no physical evidence linking them to the crime.

Two other suspects are now dead. Antonio Lopez Castillo, was killed in a strange shoot-out with police on the streets of Caracas. His body had something like 15 bullets in it by the time it got to the morgue. A fourth suspect, Juan Carlos Sanchez, died in mysterious circumstances. The police claim he died in a shootout with them in a Barquisimeto motel nine days after Danilo’s murder. The Guevara brothers claim he was with them at the Disip detention center in Caracas, and died under torture.

Then, a series of press leaks showed that a number of eye-witnesses had seen State Security (DISIP) patrols very close to the scene of the explosion less than an hour before it happened. Coincidence?

But it gets even murkier: other highly compromising leaks from the police investigation of the murder started turning up in the opposition press. For one thing, Anderson seemed to have a lot, and I mean a LOT, more money than he could justify from his salary. The guy earned $1100 a month, but he had 3 SUVs, two apartments, two jet-skis, a farm, and stacks of 100 dollar-bills sitting in his apartment. Curious, very curious.

Then a number of bankers started to come forward to say that a group of public prosecutors headed by Anderson had been blackmailing them. ‘Cough up $50,000 or face indictment over the 2002 coup.’ That sort of thing. Some of the bankers said they were on record making these accusations before Anderson got blown up.

In early 2005, Chavez’s own interior minister actually echoed the racketeering allegations. This guy is about as chavista as you can get, he’s the guy in charge of the police in Venezuela we’re talking about here. Jesse Chacon is his name. Chacon went in front of the cameras and said investigations suggested Anderson had been on the take.

It’s at this point that things started to get really screwy. First off, José Cuellar, the police investigator who gathered the evidence on the racketeering angle and the Disip patrol on the scene, was denounced as a “traitor” by the prosecutor general and shifted off the case. Then, all of the evidence Cuellar had collected linking Anderson with blackmail started getting erased from the police record. Worse, it was revealed that the public prosecutors leading the investigation – the ones who had Cuellar bumped off the case – had been accused of taking part in Anderson’s extortion racket. “The gang of midgets,” they were called, because they were all short.

I know what you’re thinking: “Wait, wait, run that by me again!? The other guys who were supposedly blackmailing these bankers were the ones in charge of investigating the murder of their ex-ring leader?”

Bizarre, huh? Well, that’s what happened. Thing is, the Prosecutor General has never acknowledged that the extortion allegations even exist, and after a solitary reference to it, Chacon, the Interior Minister never mentioned it again. It’s really quite twisted: the gang of midgets is still running the investigation now!

Finally, the government announced they had cracked the case into the “intellectual authors” of the crime – the masterminds. In November 2005, they indicted a weird, mixed group of Opposition and government figures, largely unrelated with one another. The highest-profile indictee was Patricia Poleo, a radical anti-Chavez journalist, who had actually written a book accusing the Guevara brothers of hiding Vladimiro Montesinos in Venezuela. The notion that Poleo could have hired the Guevaras to pull off a hit strains all credulity.

The Prosecutor General innitially proposed to try these masterminds on the basis of the evidence brought forth by a single alleged witness to the conspiracy: a former colombian paramilitary. The guy, Geovanny Vasquez de Armas, became the focus of frenzied media interest. And after just a few phone calls to Colombia, journalists discovered he had an extensive criminal record, had spent time in jail for identity fraud (impersonating a doctor and faking a medical diploma.) Documents they dug up indicate he was in jail in September 2003, on the dates when he claimed to have been planning the murder in Panama. As Vasquez de Armas’ credibility started to flounder, the Prosecutor General claimed to have dug up further witnesses.

The reports that DISIP agents were hovering around the scene of the explosion were never followed up. The money in Danilo’s apartment, along with all records of its existence, just diappeared. According to some versions, Anderson had a compromising sex video in his safe – obviously, that one vanished as well.

It all seems just too far-fetched to take seriously, I realize. But this is what’s out there on the record. Frankly, I have no idea who killed Danilo Anderson. But I’m sure the Prosecutor General is covering something up.