Over at Devil’s Excrement, Miguel writes a very lucid post explaining the Opposition parties’ decision to withdraw from the December 4th vote. (Note that Miguel, for reasons he has explained carefully, thinks conditions were safe enough to vote.) I’ll sum up the best parts of his piece:

Imagine you have been involved in some tough political negotiations. For the last year and half (and three elections) you have seen hundreds of millions of dollars spent on voting technology you disagree with, but you’ve come to believe a few things about it. One thing you believe, because you have been told with a straight face, time and time again, is that it is impossible to know how people voted. Then the following things happen:

1) A group of technical people tell you that this is not the case. The sequence of votes is easily known by inspecting the hard drive. They not only tell you, but proceed to show it and prove it in front of the international observers and the CNE.

You bring this up and the reaction from CNE head Jorge Rodriguez is: Impossible! Smartmatic, my people, my technical people, have all told me this is simply not possible. This is simply an attack on the CNE, you people are trying to boycott the whole process.

2) Another meeting is held with the head of the CNE, showing him the evidence that the sequence can indeed be known. On the advice of his technical people he offers to erase the hard dives within 72 hours of the vote removing all evidence and traces of it.

You go back to your technical people and they laugh at you.

3) At this point Rodriguez offers to disconnect the machines, which certainly does not seem to help much, since even if they are disconnected they keep the sequence which can be used later to know the votes.

4) Finally you get him to accept the removal of the fingerprint machines. This eliminates the problem unless they somehow manage to keep a precise record of the order in which people vote in 27,000 voting centers. This seems acceptable, until the annoncement is made publicly and Rodriguez says this is simply a concession to lower abstention and threatens that even if they are being graciously removed in this election, they will be there a year from now for the 2006 Presidential election.

How would you feel?

It reminds me of that one bit in Bill Cosby, Himself. Cosby walks into his kitchen and catches his four year old daughter clambering up the kitchen cupboard to get a (forbidden) cookie. By the time she notices him, her hand is literally in the cookie-jar. Without missing a beat, in her sweetest little voice, she looks up and says “I was getting a cookie for you!”

Nothing is quite so infuriating as catching someone in the act and still hearing them deny the obvious. After the Fila de Mariches debacle, the Opposition expected some sign of contrition from a Jorge Rodriguez very evidently caught in a long-running lie – preferably his resignation, but at the very least an apology.

Whether anger at all this is a good reason to withdraw from the vote is up for debate…but it’s certainly an understandable reason. 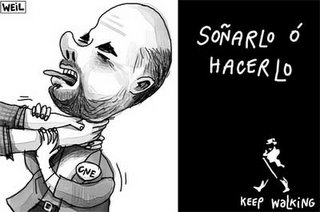 In the meantime, Sumate issued a tough statement. Key bits:

CNE lied to the country
For more than a year (and three elections,) CNE gave assurances that the voting machines did not store the sequence of votes. Now they have to accept:
1-Political responsibility for having lied to the country.
2-Administrative responsibility for having used public funds to buy machines that violate Venezuelans’ political rights.

Sumate will keep fighting for the truth
We have consistently demanded minimum democratic conditions for the Parliamentary vote to be a Clean Election… That’s why we demand compliance with the Constitution and the Electoral Laws:
A. Publishing the electoral registry with addresses
B. Doing away with the finger print scanners and the electronic voter rolls nationwide once and for all; reprogramming the voting machines and auditing the source code again
C. Hand-counting all the ballot papers

…moreover, the “morochas” are unconstitutional.