It’s a bit silly and probably a little cruel, I know, but I have this little joke I like to play when I go down to Maiquetia to pick up foreign friends or journos flying into Caracas for the first time. On our way up to the city, as we start going over the infamous Viaducto Uno, 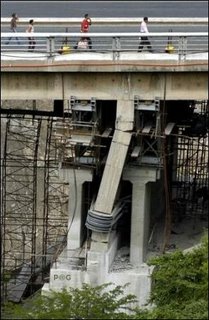 I turn to them and say, “you know, for years engineers have been warning that this bridge could collapse any minute.” They usually turn to me, half-horrified, hoping for me to tell them I’m just kidding. “Are you serious?” they’ll ask, and I shoot back: “Serious as a heart attack.”

I’ve been playing that little joke for years – I think it helps foreigners to start to get a feel for what they can expect in Venezuela.

Today, though, Vicepresident Jose Vicente Rangel one-upped me. On the day the one and only proper road connecting Caracas to its port and airport finally had to be shut down because the viaducto’s collapse is now judged to be imminent, JVR told journalists:

“It wasn’t known that this could happen, and whoever says the opposite is speaking recklessly. This happened due to the weather in recent days which have shifted the hillside. Fourteen million tons of earth are pressuring the bridge. That can happen to any construction in any country on earth.”