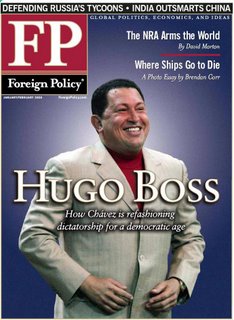 Huguito gets a front-page thrashing in the current issue of Foreign Policy. The piece by Argentine political scientist Javier Corrales is a good read, though I’m still trying to get my head around the idea of “competitive authoritarianism.”

My only problem with it concerns an omission: Corrales doesn’t mention the chavista takeover of the Fiscalia, the Prosecutor General’s Office, as an important piece of the chavista takeover of the state. This is a common oversight – even some of the best foreign observers tend to miss the significance of having the only office that can launch a criminal investigation in the hands of a Chavez crony. To my mind, though, the emasculated fiscalia is at the center of the implicit guarantee of impunity for Chavez supporters and of the ongoing sotto voce threat to his detractors, and should be seen as at least as pernicious as the chavista Supreme Tribunal, if not more so.

In any case, Corrales’ piece places particular emphasis on the debasement of Venezuela’s state institutions – which I’ve always thought is the crux of what’s objectionable about chavismo – so I’m going to put it on the Reader’s Guide to Venezuela in the Chavez Era.