The chant is a mainstay of pro-Chavez street demonstrations…and now, of Supreme Tribunal opening sessions as well. The moment came, ironically enough, towards the end of a 90 minute speech by Chief Magistrate Omar Mora Diaz 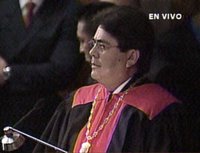 that repeatedly stressed the newfound “autonomy and independence” of the Tribunal.

The sight of the 32 magistrates, robed, on their feet, clapping and shouting chavista political slogans neatly illustrates my main problem with the Chavez regime: it has thoroughly hollowed out the institutional system set out in its own constitution. The institutions that are supposed to look over the executive branch, to keep it accountable, honest and law-abiding, are plainly, unabashedly in Chavez’s pocket. Hell, they shout his slogans, robes and all, on the floor of the Supreme Tribunal!

Most of you know that, I’m sure, but here’s something many of you probably don’t know: in Venezuela, the Supreme Tribunal has the power to select, oversee, promote and remove all lower court judges. They do that through the Dirección Ejecutiva de la Magistratura (DEM) – a kind of judicial management agency that is in fact part of the Supreme Tribunal.

Which means that when a lower-court judge has to make a decision in Venezuela these days – perhaps, a 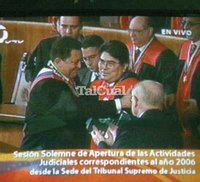 politically charged decision – s/he does so with full knowledge that his/her career prospects are in the hands of…the Uh! Ah!-chanters. S/he will perhaps remember the fate of Judge Maria Mercedes Prado, fired in November 2005 for ruling against the government’s wishes, then prevented from explaining her ruling to the press at the Supreme Tribunal’s press room and physically chucked out of the building.

This is how debased the court system that will hear Geovanny Vasquez de Armas’ “evidence” on the Danilo Anderson case has gotten. This is why a free press is the last backstop against the worst excesses of chavista impunity. And this is why efforts to stop the press from publishing everything it finds out about the Anderson case is censorship. 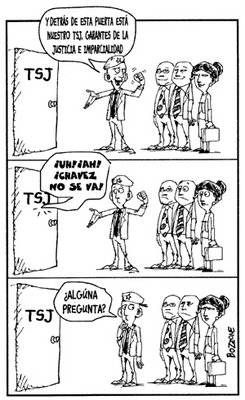 “Behind this door the Supreme Tribunal, guarantor of justice and impartiality!”
“Uh! Ah! Chávez no se va!”
“Any questions?”