A full year before the 2004 recall referendum, when the opposition believed unanimously that Chavez could not win such a vote, a single voice – utterly isolated – stood up to tell us this was not the case. Alfredo Keller made more than a few enemies with that line, but the guy is a serious pollster, so he called it as he saw it. For this alone it’s worth taking his analyses seriously.

In Keller’s latest poll, carried out at the end of last year, 52% reported they would vote for Hugo Chavez in a hypothetical election. Not bad at all – and, in fact, about 10 points higher than in mid-2005. What’s interesting, though, is what happens when Keller asks follow-up questions designed to gauge the strength of Chavez’s support.

Keller notes that 32% of voters are what he calls “transaccional chavistas,” whose support based on a clientelist quid pro quo: my vote for your misión money. Another 14% is what he describes as “bureaucratic chavistas,” people with more direct links to the state aparatus who depend on Chavez for their public sector jobs and perks. As for “radical chavistas” – those whose support is based specifically on ideological grounds – Keller places it at a mere (though boisterous and visible) 6% of the electorate. For all the sound and fury, this is just the “historic 6%” of ñángaras who’ve voted for the Venezuelan left since times immemorial. 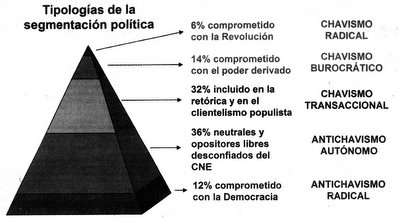 Keller’s point is that chavismo “duro” – the hardcore, reliable voters Chavez can always count on – is confined to about 20% of the electorate: the radicals and the bureaucratic chavistas. These are the people who voted on December 4th.

The rest of Chavez’s majority is mushy. The “transaccionals,” who account for 3 out of every 5 chavista votes, are unreliable, and increasingly hard to mobilize on rhetorical grounds alone. Most of them, for instance, didn’t turn up last December. Which is why Chavez can’t win without AD-style clientelist spending binges in the run-up to elections as a way to firm up his poll numbers.

Another interesting survey finding is that 74% of voters express distrust in the electoral institutions; only 26% trusts CNE. In other words, most transactional chavistas distrust CNE. Secret voting is an especially sensitive topic for transactionals, since they’re particularly concerned about endangering their access to petrostate handouts. Whether or not those fears are justified, they play an important role in intimidating “wavering transactionals.”

All of which goes some way towards explaing Chavez’s attacks against OAS Electoral Observation Mission’s reccomendation to overhaul CNE: the overwhelming perception that something’s not quite right with all these voting machines plays to Chavez’s advantage, both by demobilizing the opposition and by keeping wavering transactionals in line.

For the most part, all of this is bad news for the opposition. Chavez is not going to be short of petrodollars to spend on his transactionals this year. It’s very doubtful whether the opposition can find a candidate able to appeal to both traditional antichavistas and wavering transactionals. And Chavez will get the ultimate say on whether to appoint a new CNE able increase trust in the electoral system.

For all that, it’s important to realize that the myth of the unstoppable, unified chavista juggernaut is just that, a myth. Chavez’s support is broader than it is deep: a savvy opposition campaign run by a talented, effective candidate could poach enough transaccionals to win this thing. Not to say that it will happen…just that it could.