Teodoro Petkoff writes this spicy Tal Cual editorial on Carabobo Governor Luis Felipe Acosta Carles’s delirious sycophancy after he took out these mammoth billboards all over the country – including in Caracas, miles and miles from his state: 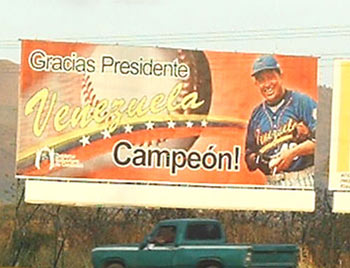 This gigantic billboard should give pause to those pious souls who still believe that Venezuela is seeing a process of great social changes. History has shown many times that the sham at the heart of supposedly revolutionary regimes becomes ever more visible when pictures and statues of their leaders start peppering the landscape, gradually becoming nightmarishly omnipresent. History, that cruel surgeon, also shows that the end of such regimes goes hand in hand with the clouds of dust kicked up by those statues and billboards as they’re toppled by the people.

Before they become official media policy, the giant photos start out as an expression of the most abject adulation. First up are the bootlickers, who quickly realize how pleasing to the autocrat’s ego, particularly for Narcissist-Leninists, it is to see their image splashed across streets, avenues, buildings and parks. Later on come the propaganda “experts,” who turn adulation into an instrument of the “revolution’s” media policy.

So far, we’re in the boot-licking stage. All around we see governors, ministers, any little bureaucratic chiefs “decorating” the façades of their offices with smiling images of I, the Supreme, while city walls are slowly taken over by “art” works with the same smiling subject. On the PDVSA building in Maracaibo, for instance, there’s a roof-to-ground-floor billboard which would be the envy of Stalin himself. Of course, the adulatee rejoices in seeing his image splayed out everywhere his gaze falls. His pleasure feeds, in turn, the diligence of those who come to realize they’re falling behind in this bootlicking tournament.