This piece about Lula in the current Economist is absolutely required reading: proof that the democratic left in Latin America can reduce poverty and inequality without oil windfalls, without populist spending binges, without empty grandstanding, without antagonizing the US and without undermining the institutional underpinnings of democracy or prosperity. Instead, Lula has done it by thinking long-term, being humble enough to learn from his mistakes, and adopting policies that make sense: 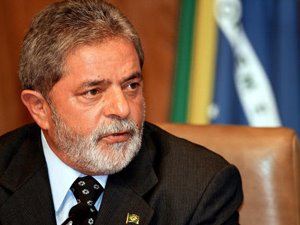 That the mass of Brazilians seems prepared to overlook the PT’s misdeeds suggests that Lula got two big things right: the economy and poverty alleviation. Comparing Brazil’s vital indicators when Lula took over with the same ones now “is like looking at two different economies”, says Vinod Thomas, former head of the World Bank in Brazil. In the autumn of 2002, Brazil’s currency, the real, plunged, largely because the markets feared Lula’s arrival. Inflation, already in double digits, threatened to spike higher and the yield on Brazil’s dollar bonds was 25 percentage points above that of American Treasuries. The new government swerved away from disaster. The finance minister, Antonio Palocci, raised the target for the public sector’s primary surplus (before interest payments) by half a percentage point to 4.25% of GDP, persuading the markets that Lula could be trusted to pay Brazil’s public debt. The central bank steadied the real and raised interest rates to choke inflation.

An economy that swooned every time confidence in emerging markets wobbled now looks steadier. Spurred by a devaluation in 1999 and buoyant demand for commodities, exports have boomed, turning a current-account deficit into surplus. Mr Palocci has used the inflow of dollars to pay off foreign creditors, including the IMF. Soon, Brazil will no longer have to worry about a falling real driving up its debt burden. The risk premium has fallen to a record low of two percentage points.

Lula points out that the government has not raised a single tax rate yet. Revenue is up because profits are higher and tax collection is better. As this improves, “we’ll be able to reduce the tax burden by cutting rates and expanding the base of contributors”. For Lula, sure growth is worth more than fast growth. “I don’t want to grow 10% or 15% a year. I want a lasting cycle of growth averaging 4% or 5%.” There will be “no magic in the economy”, he says. This year growth should be around 3.5%.

But stability has its own subtle magic. It protects the value of salaries and encourages business to plan long term. “The capital market is now an option” for financing infrastructure, says Paulo Godoy, president of the ABDIB, a group representing infrastructure firms. Despite high interest rates, consumer credit surged after the government let banks lend to consumers against their paycheques. This contributed to what will no doubt be the PT’s favourite campaign statistic: 3.5m jobs created in the formal sector between 2003 and 2005.

This points to a second achievement: a reduction in poverty and inequality—the blight that Lula was elected to combat. A poverty index tracked by the Fundação Getulio Vargas (FGV), a business school, fell from 27.3% of the population in 2003 to 25.1% in 2004. Strong economic growth in 2004 helped. More important, says Marcelo Neri of FGV, was a sharp drop in inequality, which is “now at its lowest level in the past 30 years, and still falling.”

In fact, the whole piece reads like a catalog of Chavez’s wasted opportunities. Read it all.