Lost amid the polemics on media bias and government intimidation in Venezuela is a fundamental observation about our journalism: it sucks.

Chavista or anti, Venezuelan journalists do shockingly little beyond stenography – just copying down what one politico or another has said.

What’s worse, we don’t even notice. Consumed with questions about who’s intimidating whom, who’s more biased, who’s gutsier, we hardly stop to wonder why Venezuelan newspapers hardly ever produce actual reportage, proper descriptive writing meant simply to expose us to realities we aren’t familiar with.

Think of it this way: for all the buckets of ink spent on polemics about Chavez’s new Territorial Guard and Reserve, how many of us have a feel for what those new institutions look and feel like from the inside? Aside from participants, very few, simply because the Venezuelan media just doesn’t produce that kind of story.

In fact, it took a Colombian paper, Vanguardia Liberal to produce this remarkable reportage about how the Territorial Guard and the Reserve train.

Vividly written, description-led, suffused with the feel of the reality it reports, this story showcases the kind of journalism Venezuela needs and isn’t getting. And it shows how sterile, how far off track, the debate on the Venezuelan media is. Because independence is important, yes, but competence matters more. 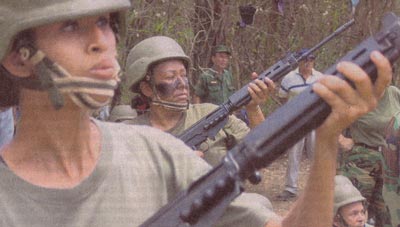