…so, hell, we’ve practically earned the right to make some authoritarian moves…

(This Bloomberg piece no tiene pérdida, so I’ll reproduce the whole thing:)

June 14 (Bloomberg) — Venezuelan President Hugo Chavez said he may shut down television stations for criticizing the government and broadcasting “messages of hate.”

Chavez said the government has begun to review all television concessions, which expire in 2007. Chavez did not specify which stations may be shut down.

“We can’t keep giving concessions to a group of people who use television stations against us,” Chavez said in a televised speech in Caracas. “Every day they broadcast messages of hate, of disrespect toward institutions, of doubt among us, rumors, psychological war to divide the nation.”

Chavez, 51, said some television stations helped plot a two-day coup he survived in 2002. The former army lieutenant colonel, who led a failed coup in 1992, is seeking a second six- year term in office in the December elections.

“They hide behind a supposed freedom of speech,” said Chavez, who was wearing a green army uniform and red beret. “I don’t care what the oligarchs of the world say. We’ve shown that we aren’t authoritarian or arbitrary.”

Chavez made his comments during a ceremony to receive the first 30,000 Russian Kalashnikov AK-103 rifles out of an eventual 100,000 Venezuela will buy this year.

Venezuela purchased the rifles to defend against a possible invasion by the U.S., Chavez said. The U.S. State Department has said the country has no plans to invade Venezuela.

Chavez also said today that Venezuela plans to buy Russian helicopters and build a factory to make rifles and bullets.

“We need a level of consciousness so we are willing to die for what we defend,” Chavez said while holding one of the new rifles. “Soldiers, this rifle is your new girlfriend. A real soldier loves his rifle.” 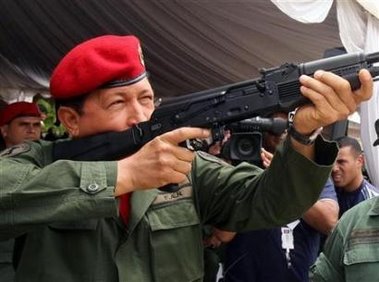