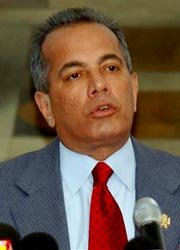 After months of sitting on the fence, Zulia’s neo-adeco governor Manuel Rosales has finally made it clear that he’s running for president – in the weirdest way possible, by announcing he is willing to participate in an oppo primary. What kind of a campaign launch is that?

Though Borges, Rosales and six marginal candidates have signed on, it’s still unclear whether there will be a primary on August 13th, because Teodoro Petkoff is still dithering. Teo’s made it clear in various ways that he’s not for a primary, and would prefer a complicated polling solution to determine the candidate. Not surprising, cuz the guy is far behind in the polls.

Sumate’s position, that they will only organize a primary if all main oppo candidates participate, effectively gives any one of them a veto over the whole thing. Is this really sensible?