…or: method to the madness.

As Condemania grips the nation, the question looms ever larger: who exactly is behind Benjamín Rausseo?

Frankly, I don’t know. I do know who’s polling for him: Oscar Schemel, of Hinterlaces, together with the Gringo Prince of Polling Darkness Dick Morris, the legendarily smarmy, ruthlessly effective DC-operative.

If so, Chavez has something to worry about: Morris is not a man to be messed with, and Oscar Schemel is an extremely savvy pollster in his own right. Schemel has spent years building the case that the only way to beat Chavez is to take a sharp turn away from politics as usual.

“The only candidate who can confront Chavez successfully with some sort of margin of success, according to this study, is an ‘outsider,’ someone outside of the current political scheme and who still has not emerged.”

In his opinion, an ample spectrum of the population, up to 49%, can be located in a “ni-ni” (neither-nor) space, since they like neither Chavez nor the opposition. Among the other half of the country, 33% is clearly Chavista and 16% is oppositional.

Schemel said that in his research the population transfers to a hypothetical leader strengths that encapsulate their values, such as that he be young, humble, comes from below and has suffered, that he has a concrete governing program and is not part of any political extremes.

Is this ringing any bells yet?

For years Schemel has been arguing that the Chavez era has produced deep changes in Venezuela’s political culture and that the opposition got stuck fighting the last war. Schemel has argued to anyone who will listen that perceptions of the Traditional Opposition political class were so overwhelmingly negative, no challenge from the existing cohort could have a chance against Chavez. His polling bears this out clearly: 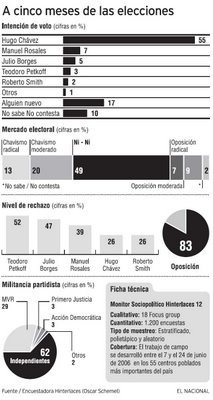 Click to enlarge.
And so, for years, Oscar Schemel has been out hunting for an outsider able to take the fight to Chavez in a way no traditional pol possibly could.

A new culture is emerging, and it’s resignifying and deactivating our received ideas about politics, amidst a social and symbolic struggle to redefine democracy, development and social relations.

The current political struggle is chiefly over interpretations and meanings. While the elites and the middle class fight to impose their own notions about democracy and citizenship, the poor majority, chavista and non-chavista, is refuting and resignifying those same ideas.

While chavismo has an important influence on the new interpretation that arises from this unprecedented political experience of the excluded, it is far from imposing its hegemony as a shared vision able to bring together the different interests of Venezuelan society.

The challenge is to build a new hegemony based on the demands of the majority for reconciliation, unity, equality, efficiency and new leaderships.

Rausseo seems to be Schemel’s answer to the question of how to launch a radical symbolic contestation of chavismo that has legs in the population at large. How to fight back effectively at Chavez’s attempt to impose a new definition of Democracy in Venezuela.

The perfect outsider to unleash the perfect electoral storm.

Can he pull it off?