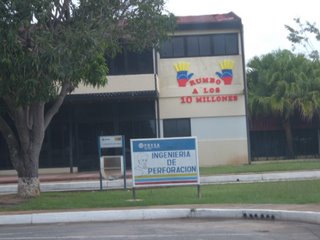 Katy says: Here is a nice little picture I got today. It is from some sort of PDVSA office, and the slogan reads “toward 10 million”, as in 10 million votes for Chávez. The two hands and the slogan are an integral part of Mr. Chávez’s re-election campaign.