Katy says: One of the main quibbles I have with the “Mi Negra” scheme that Manuel Rosales is proposing (see Quico’s interesting posts on the subject here and here ) has to do with a very un-sexy topic: volatility.

Volatility is just a fancy term for the tendency of Latin American economies to go through repeated boom and bust cycles, with GDP tracking cyclical raw material prices. Volatile economies have volatile inflation rates, and more common currency and banking crises. If all this sounds like the story of your family’s checking account, that’s because Venezuela is an extremely volatile economy.

The problem is that, with Mi Negra, the shocks that originate in international oil markets would be democratised – passed from the trading floors of London and New York straight through to Venezuela’s poor households. Is this really a good idea?

A bit of economics
This graph is from a working paper by Anoop Singh of the IMF. On the top, you see average GDP growth by region. 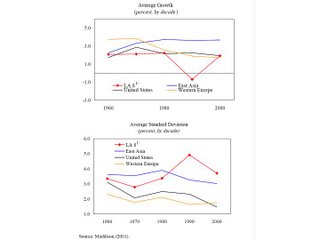 The intuition linking high volatility to low growth is straightforward. More volatile economies face more uncertainty, and when uncertainty is high, so is risk. High risk makes financing more difficult and expensive to obtain. And when financing becomes more expensive and scarce, investment lags. Which provides the link to growth: economies that don’t invest enough – on roads and schools, say, or to build factories or bring in new technology – see growth stall.

Much of the volatility in Latin America comes from the ups and downs in government spending. Venezuela is a prime example: when oil prices are high, spending usually soars, and when they fall, down goes public spending with them.

It doesn’t have to be that way. Governments have the financial tools at their disposal to help make their economies less volatile. Among them are institutionalised savings instruments like the long-forgotten FIEM. Governments also have access to foreign credit to help make it through low commodity price periods. The sheer financial muscle that governments have can help lessen the risks associated with resource-dependent economies.

But only if they pursue sound, counter-cyclical fiscal policies – which, more often than not, they don’t.

Case in point: the current oil boom. With oil prices many times higher than what has been budgeted, the Chavez government is running a deficit this year, mostly because there’s an election coming. One shudders to think what would happen if oil prices take a big tumble.

Color de hormiga
One would like to think Rosales has a better solution on offer. But Mi Negra not only doesn’t address the problem of volatility, it could make things worse. By transferring a fixed amount of oil revenues directly to poor families, it buffers the government from a portion of oil-cycle volatility, and shifts the risk into the living rooms of poor Venezuelans.

Think about it: when oil prices are high, Venezuelan families would earn, say, 600,000 bolívars per month. If oil prices were to collapse, those same families could see their “Mi Negra” incomes drop to, say, 100,000 bolívars a month: an 83% drop in their income.

Try explaining that to Doña Juanita and Juan Bimba.

Unlike governments, poor families don’t have access to the financial instruments or the know-how you need to deal with the risk of a volatile oil market. By bringing oil market volatility into Venezuelan barrio-dwellers’ pocketbooks, Mi Negra could severely undermine its own political viability.

So far, nothing Rosales has said suggests they are even thinking about this problem. But they better start, if they want Mi Negra to be politically and financially sustainable in the medium term.

It’s a difficult, but not impossible, task. For example, a fixed portion of Mi Negra incomes could be used to fund a real Stabilization Fund, one linked to medium-term oil price trends and designed to force families to save some of their Mi Negra income for bad times or for retirement. That, however, would mean less money up front for poor families, sort of like a big deduction in your paycheck. And we all kind of resent it when our paychecks come with huge deductions, don’t we?

Mi Negra is, in principle, a fine idea, and if implemented correctly it could truly revolutionize Venezuelan society and bring millions out of poverty. But it seems that by proposing an amount up front, they are putting the cart before the horse and setting themselves up for confusion and anger when, later on, they have to explain that the amounts will not be what they’d first trumpeted.

For sure, it’s still early in the campaign, and I’m sure the Rosales camp will publish more details on Mi Negra in the coming weeks. As they draft those, they should realize that, if Mi Negra doesn’t incorporate some mechanism to mitigate the oil market’s inherent volatility, it could do more harm than good.