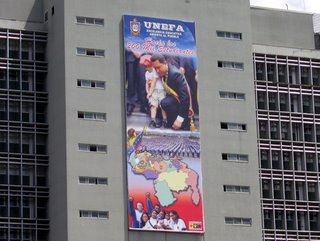 Katy says: I’m back from my trip and I’ve updated the other blog with my own pictures of the use of government funds in the campaign. I’ll be posting some more this week on my impressions of Venezuela, but I leave you with the pièce de résistance, which hangs from the former building of PDVSA Chuao. This pic manages to offend on four levels because: