Quico says: One baffling, infuriating puzzle about this election is why Manuel Rosales isn’t getting more traction on corruption. According to Keller’s 3rd quarter survey, 52% of respondents think corruption is getting worse, and 30% think it’s as bad as it’s always been. Only on crime and drugs are people more critical of the government. So why can’t Rosales get a lift out of it? 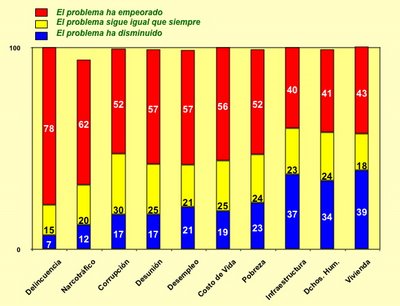 I think the answer is that corruption only riles people up when the economy stinks. During bad times, Venezuelans make a direct link between their pocket-book and corruption. They figure if they don’t have any money, it’s because people in power are stealing it. This is why Chavez managed to get so much traction out of the issue back in 1998…when oil was selling for 10 bucks a pop.

But now? The country is awash in petrodollars, people have more money in their pocket than they used to, times are good. In that setting, corruption becomes an abstract issue. Surely they know that the chavista elite is stealing a bucketfull – that’s what they tell Keller. But that realization doesn’t sear with the intensity of rage it would engender if people perceived that they can’t afford lunch because somebody in power stole their money.

It’s one of the screwy features of petrodependency. Corruption, as an issue, only “works” in Venezuela when the oil market tanks.