Quico says: Remember those “compare and contrast” essays they’d assign you to write in high school? Ah, the nostalgia! Here, lets do another one just for fun. 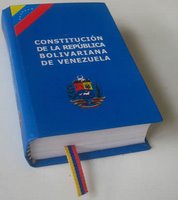 Item 1. Constitution of the Bolivarian Republic of Venezuela of 1999, Article 145:

Public employees are at the service of the State and not of any partiality. Their hiring and removal cannot be determined by political affiliations or orientations. 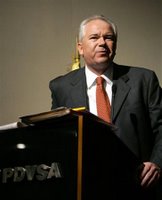 I want our management to help us erase from our rules, from our internal communications, from any element that runs the company, anything that could cast doubt on our support for President Chavez. We have to say clearly…that the new PDVSA is red, very red, from top to bottom…

It is a crime, a counterrevolutionary act, for any manager here to slow down our workers’ political expression in support of President Chavez. Here, we back Chavez, he is our leader, the paramount leader of this revolution, and we will do whatever we have to do to support our president. Anyone who doesn’t feel comfortable with that should yield his spot to a bolivariano…

We had to get rid of one guy, a man from our Operations Division, who allowed candidate Rosales to land and move around our company, “bloody hell, what’s that about?” (coño pero ¿qué vaina es esa?) we said, “what is happening here? are they going crazy? are we really infiltrated by the enemies of the revolution?”

Let it be clear that we won’t allow it, when we find out about that sort of thing we’re going to liquidate it decisively.

It outrages me…to find out we have “NiNis” working here, “light” people working here, saying we need to open up to company. No way. If anyone forgets we’re in the middle of a revolution, we’re going to beat it into them: (se lo vamos a recordar a carajazos) this company stands with Chavez.