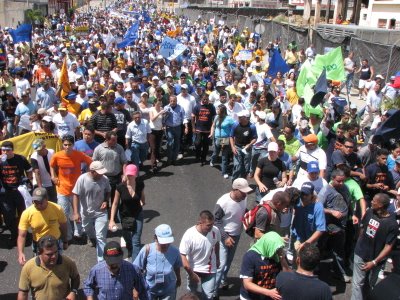 JayDee says: First off, sorry for the delay. I’ll tell you, though: Saturday’s march was impressive. I say this having been thoroughly underwhelmed by last month’s “Avalanche”, as well as the official presentation of the Rosales platform: “26 KM’s for 26 million” was brilliant.

The march had a nice populist touch to it, with Rosales working his way through the streets of Caracas, shaking hands with anyone who walked up to him. There were moments when the crowd crashed in on him, with everyone vying to touch the man or shout a word of encouragement into his ear.

Still, from what I could see, Rosales never lost his cool, and looked genuinely comfortable.

It was a festive affair, and the people I talked to were happy, wearing wide smiles that suggested faith in the righteousness of their cause, and a belief that the country is on the verge of change for the better.

It stood in direct contrast to, say, last month’s presentation at the EuroBuilding, which had musicians-on-the-deck-of-the-titanic feel to it.

What surprised me most was the relative passivity of the Chavez supporters who decorated the sidewalks near the City center. The mass of Policia Metropolitana placed at strategic locations seemed there for decoration. Sure, there were a few Chavistas who flashed the finger, screaming obscenities as we passed. But most of the folk in red stood by the side of the road, clutching pictures of their leader, smilling and dancing to the reggeaton blasting from truck-mounted speakers. I even saw a few opposition marchers stop for a friendly chat with a Chavista and hand out a bit of campaign literature.

The show was a startling reminder to those who would claim that Venezuela, at this moment, has become an Authoritarian or Totalitarian state.

What I liked best about the march was the implicit contradiction it drew between the challenger and the incumbent. Chavez has been leading a sheltered existence these days. Not that it seems to be making much of a difference, but the incumbent hasn’t been waging a very impressive campaign.

He spent all summer overseas, campaigning for a Security Council seat that he didn’t win. Since returning, his speeches have been mostly devoid of his trademark charisma and filled instead with abstractions about fighting the Devil and his Evil Empire.

Yesterday, Rosales was out there, on the street. Yes, he had a good deal of protection around him, but still, anyone who wanted to get close to him could.

This is the sort of campaign stunt that has the chance to cut into Chavez’s base.

My reasoning is tied up with what I have learned from people such as, yes, José. Some would criticize him for being “facilista” – too lazy to inform himself and vote for change. To label Jose in such a way, however, is to fail to see the state of this country from his perspective.

Now, some might rightly protest that if Chavez wins on 3D, this country has a whole lot worse in store a few years down the road. But most Venezuelans from the barrios don’t worry about a few years from now. They worry about tomorrow.

And for someone who lives and works in a Chavista neighborhood where looting and unwanted police attention are a real worry, keeping El Presidente in power is the best way to insure that your bodega doesn’t get burned to the ground on December 4th.

What is the solution, then?

More days like Saturday. More live, grassroots attempts to show that there is an alternative, and it just shook your hand.