Quico says: I guess the part I found most interesting about that Evans/McDonough poll was not so much the horse-race questions as the mood-of-the-electorate questions – the ones aimed at measuring the structural, socio-economic conditions against which the campaign takes place. 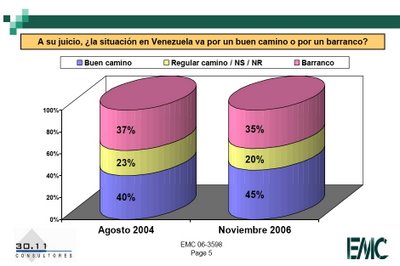 The reason is not hard to figure out: incomes for Sectors D and E have been rising far faster than inflation since 2004, as even that hardcore antichavista (but intellectually honest) magazine VenEconomy acknowledges. So people are better off, and, more relevantly, they feel better off: 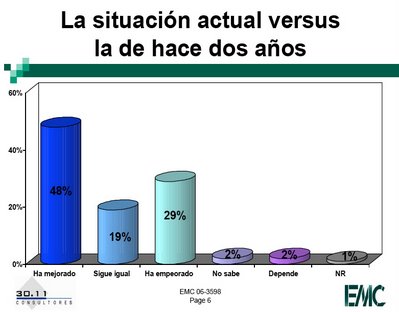 More relevantly still, most people expect to be even better off in the future… 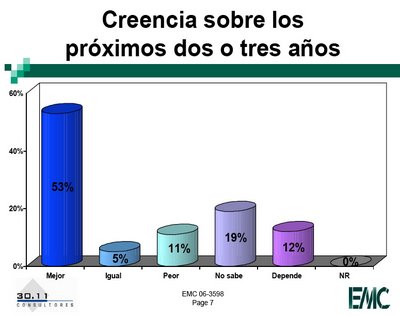 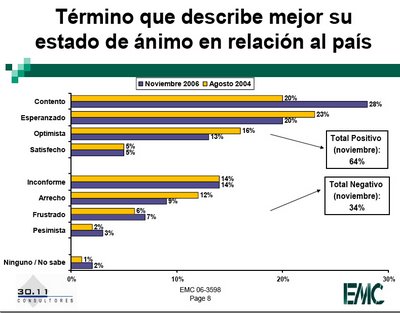 No surprises here: I’m sure if you’d asked these questions in 1974 or 1979, after the first and second oil booms, you would’ve gotten similar responses. And I’m sure if you asked them today in Sudan, or Russia, or Kazakhstan or any other petrostate, you’d hear a broadly similar story.

After all, there’s nothing specifically Venezuelan about the situation we’re in: oil gets sold, dollars come in, money flows through the economy, most people see some benefit, and so they’re satisfied…maybe not ecstatic, imaginably not particularly enthusiastic, but at any rate satisfied.

Numbers like these certainly blunt the appeal of any pitch for a change in leadership. For sure we are very far away from the situation in 1998, when oil was selling for $10/barrel, incomes dropping, and a mass of very angry people ready to vote for the most radical departure from the status quo on offer. The kind of pocketbook-led, broad-based arrechera that fuels demand for new leaders is just not there.

None of this is Manuel Rosales’s fault, and very little of it can be credited to Chavez. But those are the structural facts, the socio-economic backdrop the campaign is taking place against.

All the passion in the anti-Chavez campaign comes from people like us: middle class, educated, class A/B people worked up over ideological, abstract issues. Which is not to say those issues aren’t real, and important, but to point out that we’re 15% of the electorate and the stuff that keeps us up at night no sube cerro.

Just about any challenger in just about any petrostate would have a hard time making headway in this context. So it really shouldn’t come as a surprise that a not-very-charismatic candidate running against a broadly well-liked leader should have trouble broadening his appeal beyond his base constituency.

I realize there’s enormous resistance out there to this message. But striking out on our own and believing what we want to believe has done the anti-Chavez movement terrible damage in the past. It’s better to face up early on…these realities don’t stop being real just because we don’t like them…