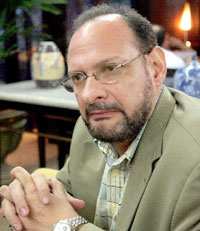 Quico says: Sigh. Nothing takes the sheen off of a juicy leak quite like seeing the leakee interviewed at length the next day on ND. In this detailed interview, Hinterlaces big cheese and talking head in chief Oscar Schemel goes into much more detail about his polling than I could go into yesterday. It’s in Spanish, and too long to translate, but well worth reading if you are able.

Two things I noted. There are some strange mismatches between Hinterlaces’s data as Schemel talks about it and Hinterlaces’s data as ND publishes it. Schemel says, if anything, the undecided group is growing, but the ND reported tracking poll shows the opposite. Schemel describes Chavez’s trend line as falling ever so slowly and Rosales’ growing ever so slowly, but ND shows Chavez steady and Rosales rising. I guess this has much to do with the treatment of the “won’t respond” cohort, but still it’s puzzling.

Secondly, with characteristic single-mindedness (but also with the focus group data to back it) Schemel insists that Rosales is not winning over key independent voters. He resists the interpretation that Undecideds and No Contestans are almost all Rosales voters.

Why? Schemel mentions something I fear is at the heart of the problem: the emotional dimension. Voting for a challenger has to feel right. You have to look the guy in the face and feel like you know what makes him tick, feel comfortable with his presence, feel that he understands you and your problems, just trust him instinctively. Rosales just doesn’t seem to be connecting with NiNi guts strongly enough to bring them out to vote for him. If that doesn’t change in the next two weeks, it’s possible that the Undecideds will “break” in favor of abstention – a disaster for the opposition.

So, it’s still uphill, and time is desperately short now.