Juan Cristobal says: – Well, the results from the second survey of Caracas Chronicles’ readers is out. This one, as you will recall, focused on your political views. So let’s begin talking about you and your ideas.

You tend to self-identify as moderate, with the center-left/centrist/center-right spectrum taking up 76% of the answers. You tend to lean a bit more to the left than to the right.

Some of the answers in the “It’s complicated” portion were complicated indeed. Here is a taste:

“Kind of a red-neck hippie from the Southwest (think Edward Abbey)…I guess I am more of a Libertarian than anything…but a registered Democrat.”

“Libertarian except for immigration policy; but vote Republican because I could never quite accept the Lib. “wasted vote” rationale. Strong supporter of President Bush. I will miss him.”

“very lefty in social terms, very righty in economic ones, except I am very pro a rational regulatory environment (the stock exchange is way too loose for my taste)”

“lets call it enviromental capitalism with a touch of socialism and definetively anti anything radical, especially violence”

“Liberal in the Canadian sense, not in the US sense”

You are, unsurprisingly, pro-opposition, although 5 of you declared yourselves strongly chavista. Thank you PSFs, for taking the time.

Those of you who are complicated were even more numerous this time around. Many of you were simply opposition, but highly critical of opposition leadership and highly wary of being identified as opposition. In other words, you’re Ni-nis, you just don’t know it yet.

Here were some of the complicated answers you gave us:

“pro opposition, but they are idiots. My wife is Venezuelan and is a former Chavez supporter (never voted for him though), but now rabid opposition support…I didn’t do anything! I swear!”

“strongly anti chavista but critical of many oppo. Pro Teodoro will describe it better”

“i like some of the professed goals, but i’m an anti-institutional anarchist, so you can imagine…”

“I think the opposition is the lesser evil…”

“Strongly against Chavez, however aware that an awakwening towards how the lower classes were marginalized in the past was necessary. Chavez brought this awakening but not the solution. Therefore strongly against Chavez, however The opposition doesn´t show signs of having a solution or even caring about making this change a reality, it seems like they are still after their own self interests (as usual).”

“I love the country, i can not side with this patetic oppo movement either.”

“I’m not against the stated goals of Chavez, but think that he is failing to achieve them miserably. I really believe his intentions are far from what he says they are, which is part of why they fail. Also, I am very sympathetic towards the majority of Chavez supporters, just not the ones in positions of influence.”

“I think Chavez is tapping into a reality of serious problems that existed under the ancien regime. I do not believe the current opposition would do a good job of addressing those very serious issues. It would be fantastic to see someone with both a real committment to democracy and also helping the poor.”

Then we started discussing the opposition. First up, their institutions:

Podemos, UNT and Primero Justicia are the only political parties getting any love from you. But not surprisingly, it’s the students that have the best image in the opposition, with Primero Justicia a distant second. 40% of you view the student movement in “very favorable” terms, and 23% label them “My favorite.”

In fact, if you add “My favorite”, “Very favorable” and “Somewhat favorable”, the students get a whopping 83.6%. Primero Justicia gets a less enthusiastic 71.6%, while none of the others gets more than 50%.

After that, it was on to specific opposition personalities. 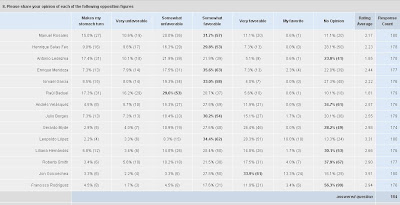 Clearly, the best rated opposition politician is… Jon Goicoechea! Yes, by a wide margin, the most visible leader of the student movement, UCAB undergrad Goicoechea wins. I guess it’s too bad that because of his age he would have to wait until 2018 to even be allowed to run for President. Leopoldo López comes in a close second, followed by Gerardo Blyde, Francisco Rodríguez, Roberto Smith, Liliana Hernández and Andrés Velásquez.

The most disliked person on the list was a surprise to me: Raúl Baduel. We don’t save a lot of love for military turncoats at Caracas Chronicles!

When asked to write the name of the opposition personality you trust the most, most of you simply confirmed that Goicoechea was your favorite. Among the people not listed above, many of you named Teodoro Petkoff. Some of ranted about how you don’t trust any of them, while a few of the lunatics among you kindly put Quico, Miguel, Daniel and I in the list of people you trust.

Next we asked for your views on the government’s institutions:

Not surprisingly, they all rank dismally low. But the one that beats them all, the headquarters of horrors, if you will, is the Comptroller’s Office. I wonder if this would have been your response a year ago. It even beats the National Assembly and the PSUV!

Now, to me, the real horror in your responses is that, of the government institutions listed, you rate the Armed Forces the least unfavorably. Perhaps you need reminding which institution harbored, educated, nurtured most of chavismo’s key figures. Perhaps you need to reflect on who is cashing in the most from this Robolution.

Then we asked you to rate people inside the government. The bottom of the barrel is crowded indeed.

Surprisingly, Hugo Chávez is not the most hated man on this blog – Chavista henchmen Mario Silva and cheerful rabble rouser extraordinaire Lina Ron manage to out-Chávez the Fat Man in the Palace.

The two figures you dislike the least are former taxman José Vielma Mora and current Minister of Finance Alí Rodríguez, but their ratings are nothing to brag home about. Vielma Mora may be the least-hated chavista around, but he’s still ranked lower than Raúl Baduel, the worse of the lot in the opposition (see above).

Then we asked about the media. First up, an open question on the media outlets you trust the most. This was a hodge-podge, with anything from Caracas Chronicles to Yahoo News to Noticiero Digital showing up. When asked to rank using a closed list, here is what you answered:

The Economist was the best-regarded media outlet in the list, followed by El Chigüire Bipolar (!) and El Universal. I guess, after all these years, we still haven’t lost our sense of humor. The least appreciated, not surprisingly, was VTV, followed by the largely unknown Canal i and by Noticiero Digital.

As for media personalities, here are the results: 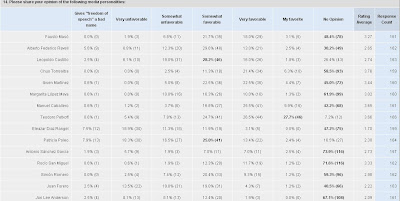 Eleazar Díaz Rangel is ranked the lowest, closely followed by New Yorker writer Jon Lee Anderson who, in all justice, is a great writer but perhaps a bit too sympathetic toward Chávez for your tastes. Juan Forero and Patricia Poleo don’t get much love from you, but Chuo Torrealba, Teodoro Petkoff and Manuel Caballero do.

We also asked for your views on foreign leaders. Here were your responses:

Alvaro Uribe tops the list, followed by Lula, Michelle Bachelet (guácala) and Ingrid Betancourt. Surprisingly, this is one of the few rankings where George W. Bush does not figure at the bottom, which means you are either highly intelligent, very right-wing, or you really, really dislike Daniel Ortega, Rafael Correa, Piedad Córdoba and Cristina Kirchner.

Oh, and on this survey, Obama beats McCain, but not by a whole lot.

Then we asked for your views on historical figures.

The highest-ranked figure was towering intellectual Arturo Uslar Pietri, closely followed by Francisco de Miranda (huh? You’ll have to explain that one in the comments section). The bottom is reserved for Caldera, CAP and Marcos Pérez Jiménez, but it’s Caldera where most of you place the blame. Clearly no love for the chiripero amongst you.

Also worth pointing out that so many years of permanent Bolívar cult have left you feeling a bit ho-hum about the man.

We also asked about specific periods in history and historical institutions:

The old PDVSA tops the list. 53% of you ranked it either “My favorite” or “Very favorably”. The Pacto de Punto Fijo came remarkably in second place, which was a total surprise to me given how you don’t hold much fondness for AD and Copei, the two parties that actually implemented the Pact. But the loser in this list was the Guerrilla Movement, not surprisingly.

Since the survey was interminably long, we’ll continue digesting the results on specific policy issues in Part II of this post…