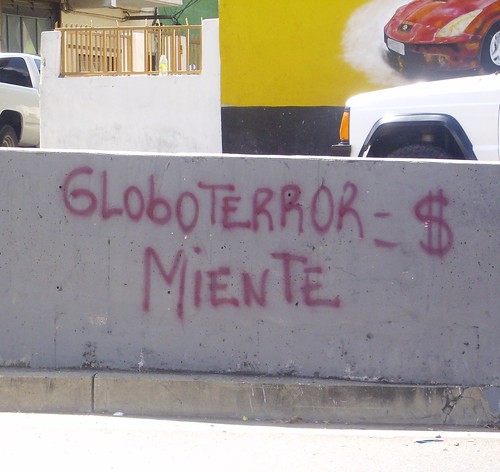 Quico says: What I find most significant about Chavez’s announcement that he has decided to shut down Globovision is, precisely, that he announced it.

Think about it: if the guy was at all concerned to maintain even a minimal kind of legal window dressing in place, he easily could have. Nothing was stopping Chavez from preserving at least a bare-bones plausibility to the inevitable subsequent claims that the decision to close down the station had nothing to do with him. He could’ve just given the order to Conatel, or the Supreme Tribunal, or whatever, then claimed the decision had been theirs all along.

Granted, nobody with the slightest sense for the way power flows through Venezuelan society these days would’ve bought it. Still, doing it that way would’ve shown that Chavez remains minimally aware that he is, at least theoretically, supposed to be the constitutional leader of a legally constituted republic rather than the owner of an hacienda.

No such luck. Just as with the RCTV shutdown and the decision to throw the book at Manuel Rosales, Chavez wasn’t content merely to piss all over the rule of law…instead, he made a point of putting himself on theatrical display, exuberantly pissing all over the rule of law under neon lights, live on national TV…just to make extra-special sure nobody is left in any doubt about who has this particular chupetin by the palito.

Which strikes me as being as much the story here as the actual decision to shut down of a key dissident opinion outlet: not just the illegality of it all, the rampant intolerance of it all, the blatant authoritarian meanness of it all – that stuff is periodico de ayer – but the sheer, morbid refusal even to pay lip service to the notion that the 1999 constitution is ontologically distinct from toilet paper.