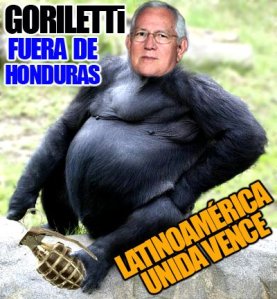 Quico says: Lets say that, as the ALBA block claims to believe, the interruption of constitutional rule in Honduras is simply unacceptable and Zelaya has to be restored as head of state post-haste. As soon as he’s reinstated, he’ll find himself once again facing a congress overwhelmingly – indeed, unanimously – opposed to his brand of leadership, and one whose claim to legitimacy rests on the same votes his claim rests on. After weeks of breathlessly demonizing those congressional leaders as goriletti’s fascist goons, what are the chances that Zelaya would suddenly acceed to come back and recognize the legal role accorded to them in the constitution?

The problem in Honduras isn’t just bringing Zelaya back as president. The real challenge is to re-establish constitutional rule in the country. But with their over-the-top, hyper-inflamatory rhetoric, the ALBA leaders have managed to entrench a divorce between those two goals: far from easing a return to constitutional normality, bringing Zelaya back under the circumstances Chávez has created would almost certainly mean setting back the re-establishment of constitutional rule.

After weeks of rhetoric coldly calculated to escalate the Honduran crisis (i.e., the panoply of willfully-obnoxious jabs around the “Goriletti” meme), Chávez and his cohort have driven a stake through the heart of any effort to re-establish the minimally civil, law-governed relations between the branches of government that constitutional rule relies on. Zelaya himself has grasped this, and now vows to retake power as part of an “insurrection” – that is, as part of an overthrow, rather than a re-establishment, of existing constitutional structures.

And it’s no wonder, because for the ALBA block, the Honduran crisis never was about re-establishing constitutional rule, much less the kind of liberal democratic rule a constitution like Honduras’s sets out. That Chávez explicitly rejects that vision of democratic legitimacy is amply established by 10 years worth of public speeches, including his dramatic and extremely public refusal to sign the Quebec Declaration establishing OAS’s Democratic Charter back in 2001. All along, Chávez has been explicit: when he says he supports democracy, he means he supports the right of leftwing presidents to rule unencumbered by legal constraints of any kind.

Chávez has become a crusader for the Divine Right of Caudillos, championing their cause with absolute dedication and only the barest of constitutionalist qualification. So as Central America sleepwalks into a regional war, the thing we need to ask ourselves now is simply this: do we support the Hilo Constitucional? or do we support the Constitution?