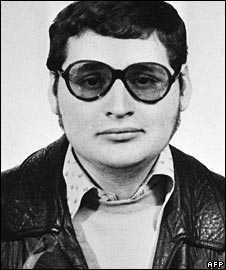 I almost choked on my breakfast burrito this morning when I read Ian James’s write-up for the AP of Chávez’s lunatic little dithyramb to Carlos the Jackal the other day:

Hugo Chavez has defended the alleged terrorist mastermind Carlos the Jackal, saying the Venezuelan imprisoned in France was an important “revolutionary fighter” who supported the cause of the Palestinians.

Wait a minute: alleged?! ALLEGED?!!!? Is this some twisted joke?

Calling Carlos the Jackal an “alleged terrorist” is like calling Barack Obama an “alleged US president” and Ian James an “alleged AP hack”!

We’re talking about a guy who’s not just been convicted in open court of killing two French police officers, but who’s publically taken responsability for any number of notorious terrorist acts, including classics like kidnapping eleven OPEC oil minister all at once, and who’s publicly defended such acts not only at the time, but also in retrospect, in a prison-cell book that accepts responsibility for and stridently vindicates his multi-decade campaign of threats, murders, kidnappings and bombings; a virtual compendium of terrorist acts.

I’m no ranting critic of the gringo MSM, but this article shows it at its spineless worst. Whatever editorial guideline it is that landed that adjective before that word makes no sense at all. The AP’s decision to qualify the only profession Ilich Ramírez has ever known drains the word “alleged” of any meaning whatsoever, and tends to cast a patina of respectability on Hugo Chávez recent, full-throated defense of his brand of terrorist tactics.