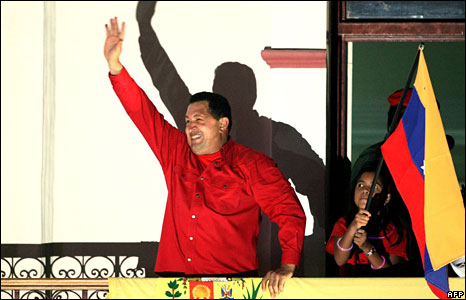 For the second time in a week, Hugo Chávez "challenged" the opposition to collect signatures and try to recall him.

This is bizarre even for Chávez.

A recall referendum is not in the opposition’s cards – they are focused on the legislative elections in 2010. Furthermore, it is highly unlikely they would be able to collect the necessary signatures, given the persecution that ensued the last time they did that. And even if they did, it would be really difficult to get the 7,309,080 votes they would need to unseat him.

But Chávez clearly is. He is itching for it. And all it would take to trigger the Referendum is his signature.

This is something we should keep an eye on.