So I spent the weekend putzing around with election forecast maps, something of a guilty-pleasure for someone who’s weary of this year’s parliamentary elections being mistaken for a normal, democratic vote. No matter how you slice the data,  though, the conclusion is always the same: this year, we’re going to be fighting not just the goverment, but also an outrageously gerrymandered map that makes it easy to imagine a number of scenarios where we win most of the votes but they win most of the seats.
As we saw yesterday, 110 out of the National Assembly’s 165 members get elected uninominally, through 89 constituencies (known as “circuitos”). Most of these circuits are single-member constituencies, but some elect two or even three representatives. (Usually, in a multiple-seat circuit, the single largest party takes all the seats at stake.)
To try to model September’s election, I worked from the 2007 Constitutional Reform Referendum results. I chose 2007 for a number of reasons: for one, it shows how a “50-50 electorate” is likely to spread itself over the map CNE has just created, since, remember, in 2007 the opposition won with just a smidgeon more than half the vote. Also, because it was a straight up yes-or-no question, you avoid the complications of having to apportion independents and/or dissident chavistas to either of the two polarized groups, as you would if you work from the 2008 regional election results. Last (but certainly not least), I had excellent, detailed data handy for 2007, so it seemed only natural!
(At the end of this post, I also show you a reader’s estimate’s of how the map would look if 2010 tracks the 2008 regional elections rather than the 2007 referendum.)
Once I’d gathered all that data, I put it into qGIS (my trusty, open-source Geographic Information System software) and, at-da! – all kinds of pretty election forecast maps started pouring out. Check them out:
This first map is pretty straightforward: it just shows what would happen if, this year, people voted just as they did on 2D, 2007, when the government’s proposed Constitutional Reform was defeated. Even though the opposition won a majority of the popular vote that day, the map CNE’s drafted is, erm, not kind to us in such a scenario:

To pad that out with the “list” and indigenous results, a straight-up re-run of the 2007 vote this year would see us get just 65 out of 165 Asamblea seats.

Didn’t believe the map was rigged? Check this out:

Going a little deeper into the data, I divided the map into five categories:

In effect, in 2007, the government won circuits representing 53 seats by more than 5%. We won circuits housing 32 seats by 5% or more:

That implies that if we retain all the areas we won in 2007 and make a clean sweep of those Toss-Up circuits, we could get 57 seats to the government’s 53:

By the same token, if the government swept the Toss-ups, they’d end up with 78 circuit seats to our 32.

Probably the more reasonable estimation is that we’ll split the toss-ups, which would give us 44.5 seats to their 65.5 seats. (I guess that 0.5 seat means Rafael Simón Jiménez is poised for a comeback!)

If it did come out like that, and filling in a reasonable list-estimation, I think our central scenario has to be that in a 50%-50% election, the government wins 95 seats and we win 70.

What’s interesting, though, is that for all of CNE’s gerrymandering, there are quite a lot of competitive seats out there:

The outer-edges of Maracaibo are toss-ups, as is the Costa Oriental del Lago:

There are tons of competitive circuits in the Andes, including Rubio, the Northeast of Táchira state, Ejido and El Vigía in Mérida as well as the Northeast district there, and even the Catatumbo region and the south of Lake Maracaibo: 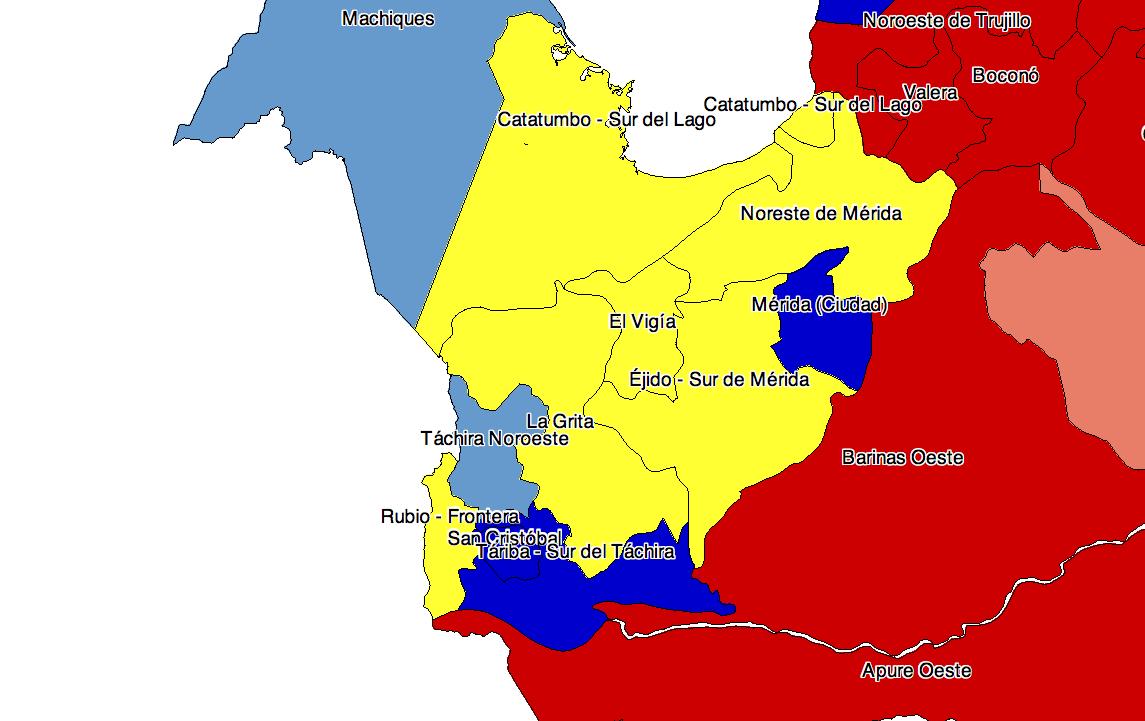 The Center-West region is pockmarked with competitive seats as well, including the North of Barquisimeto and the South of Valencia, each of which carry a delectable 3 seats. San Felipe-Nirgua, in Yaracuy, looks competitive too. Punto Fijo and the West of Falcón state (not on this map) are toss-ups too:

It’s disappointing but not surprising that the Caracas Metro Area is one of the least competitive in the country: this area is really spacially segregated, so gerrymandering was pretty straightforward. But a couple of districts may imaginably be within reach, including 23 de Enero (imagine that!) and the circuit CNE cobbled together out of El Valle, Coche and Santa Rosalía.

The east of the country has some races worth watching, too. Carúpano and Rio Caribe, the Anaco region in the West of Anzoátegui, and most of Bolívar state – including the two seats in Ciudad Bolívar, are up for grabs. Maturín’s three seats are probably out of reach, but I think we need to consider the three-member circuit for San Felix and Puerto Ordaz a bit of a wildcard. Ciudad Guayana has always been deep red, but the electric crisis has hit the region especially hard and anything could happen.

Of course, this is just one way to slice up the scenarios, and not necessarily the best one. A longtime reader (whose name I’ll reserve to protect the procrastrinatory) has done a similar exercise on the basis of the 2008 Regional Elections results. He proceeded a bit differently than I did, seeking to identify those circuits the opposition might most reasonably target to try to get a majority. The results he gets are somewhat different from mine, due to the differences in voting patterns between 2007 and 2008:

The Gerrymandered map really comes into its own in this kind of scenario. If voting patterns from 2008 are repeated this year the government’s going to milk almost 75% of the seats out of just 53.5% of the vote:

That would obviously be a disaster, so the question is which of the seats the government would’ve won with the 2008 votes the opposition is best advised to go after. Seven of those seem like “low hanging fruit”: circuits in urban areas run by oppo mayors or governors. The opposition has to win those.

Beyond that, it needs to engineer a nationwide swing that puts it into contention in 45 other seats which the government won by less than a 20% margin last time. Those are their target seats:

Fight the government to a draw in those target circuits, with this damn map, you still come up short.

So even assuming the opposition gets all its must-wins and picks up half of its target seats, the “Central Scenario” based on the 2008 vote split still leaves the government with a majority.

The upshot is simple: 50%+1 vote is good enough for them this year, but not good enough for us. We’re not just fighting chavismo here, we’re fighting the map as well. So we’re going to need something in the 52-53% range to have a shot at taking the majority.

No two elections are quite alike, so a quick glance at the 2007-based map and the 2008 one shows quite some variation in what we can consider a “swing circuit”:

In the end, a lot will depend on the specific candidates each side picks, as well as on the strength of chavista turnout. I have a feeling that the chavista machine is going to have a very hard time frog marching their people out to the polls in the kind of environment the country’s likely to be facing in September. So my sense is that the government could find itself staring into a polling abyss by the middle of the year.

How they’ll respond to that is anybody’s guess. One thing I’m sure of, though: it won’t be pretty.