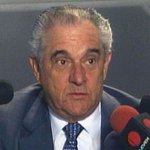 The largest shareholder in Venezuela’s sole remaining opposition-minded TV channel, Globovisión, has been arrested. (Update: apparently, the court let him out on bail, sort of)

His alleged crime? Saying something in Aruba, during a meeting of the Interamerican Press Society, that really ticked the government off.

Chavistas have gone ballistic over this, but the funny thing is – I can’t find what it was that he said!

Serious, Google "que dijo Guillermo Zuloaga SIP" and you get hundreds upon hundreds of pro-chavista websites denouncing his speech, demanding an apology, calling for prosecution, and basically falling over each other in offering scorn for the enemies of the Revolution. And yet, not a single one of them has a quote of what he actually said!

The only thing I found was this link to a Globovisión story, that has Zuluaga saying – and I’m paraphrasing a paraphrase – "one can’t really say there’s freedom of the press in Venezuela when the government is shutting down media companies", and adding that while Hugo Chávez was democratically elected, he has spread division among Venezuelans and has only been President to a group of us, not the entire nation.

Is that all it takes to get hauled off to jail? Because if it is, things are much, much worse than we thought.

For a government that claims it is being assaulted by an internationally orchestrated media campaign against it, it sure is hard to find what its opponents say about it.

PS.- Reader mendozam wins a lollipop for finding the text in which Zuloaga apparently says (suggests?) that  Chávez ordered the troops to shoot at marchers on April 11th.