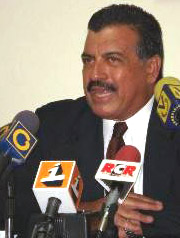 Is it just me, or do the Opposition’s Unity Roundtable promoters treat the MUD more or less the way the parent of a Down Syndrome kid might treat her kid: with a panicky determination to magnify any achievement, no matter how mundane?

The Roundtable’s agrement on a unity slate for September’s parliamentary election is being hailed as an earth-shaking achievement this week. Instead, it’s merely the absolute, threadbare minimum the country should allow itself to expect in the current atmosphere.

The unity slate was accompanied by today’s partial parliamentary primaries, a process that will only partially help establish the MUD’s democratic credentials.

In fact, it’s hard not to look at the primaries with a real sense of missed opportunity. By agreeing to hold primaries in just 22 districts – not all of which the opposition has a real chance in – while reserving a variety of sure-thing districts to bona fide ancien regime figures, the MUD wasted its best opportunity in years to signal a clean break with its own past.

Even a quick glance at the MUD’s unity slate shows up some nasty surprises. For one thing, all the spots reserved for Copei show, rather than a first and last name, the word "Copei" – presumably because even now the venerable tolda verde hasn’t gotten its shit together enough to decide who’ll get which spot on its quota. Copei’s internal elections are expected to take place in the coming weeks.

And then, high up on a salidor spot on the Miranda list, we find none other than Cristobal Fernández Daló, the old MAS-stalwart and chiripero eminence grise who we’d all sort of assumed had found himself another way to make a living since he was last heard from, four years ago, endorsing Hugo Chávez for president.

We get Alfonso Marquina, a pol so greasy you could probably put a rig on him and extract 400,000 b/d of oil. And, taking up not one but two spots on the Bolívar Slate, that hardy perennial, Andrés Velásquez, a guy who just doesn’t know the meaning of quit when it comes to electoral politics – except, that is, when the time came to defend his votes for president in 1993.

Throw in the belief beggaring decision to run Juan José Caldera in Yaracuy, Henrique Salas Römer in Carabobo, Hiram Gaviria in Maracay, and (Holy Apatosaurus, Batman!) Omar Barboza in Zulia, and you start to wonder if the MUD has some perverse plan on its hand to confirm every negative stereotype Chavismo has worked hard to enshrine about the opposition.

I realize it’s easy to be harsh from a distance, and I know reaching agreement even on this list required weeks of negotiations (as well as countless liters of fine Scotch). But the point remains that the logic of jockeying for consensus among party leaders behind closed doors was always bound to yield a list well stocked with figures strongly associated – fairly or unfairly – with a past we’d all rather forget. Too many MUD candidates just smell like puntofijismo – and that’s going to create serious problems for an opposition that needs to portray itself as different not just from the government but also different to its own worst incarnation of recent years. It doesn’t matter how many Carlos Vecchios or Stalin Gonzálezes of Julio Borges you have – they will focus on the many old faces in our slate.

To destabilize and unseat an authoritarian government you need visionary leadership, leadership that can earn the support of swathes of voters who just aren’t comfortable thinking themselves as "opositores", leadership that, at first sight, tells people "we’re not your father’s opposition". Sorry to be a sourpuss, but it seems to me blindingly evident: this bunch ain’t it.