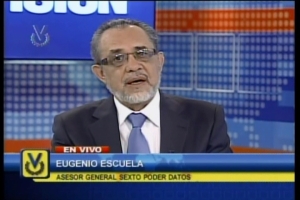 Until today, I had never heard of Encuestadora 6to Poder Datos.

I had heard of Datos, alright, easily the most secretive but one of the best regarded pollsters in Venezuela. But this one didn’t ring a bell.

Then I used The Google and found out it is headed by Eugenio Escuela, who has been running polls under his own name for a long time. It’s apparently a joint venture between Escuela and the Venezuelan (opposition) newspaper 6to Poder. Here is the note from when the polling firm was launched.

At any rate, they have apparently come out with two polls recently, one in June, another one yesterday. They show the gap is closing, although Chávez still leads Capriles 41-35. 23% are undecided.

Is it legit? Who knows. But it’s a data point. And it confirms this little graph by our friend Iñaki.

Quico’s dissent is after the break…

Quico here. As y’all know Juan and I don’t always agree, which has always been a net positive for the blog. Today’s post is a clear case in point: I wouldn’t trust 6to Poder Datos any further than I could throw it.

Why? Because I’m suspicious of never-before-heard-of pollsters that surface for the first time a couple of months before an election, and I’m especially suspicious of pollsters that are clearly associated with one side of the political divide or another, and I’m extra special suspicious con doble tirabuzón of pollsters that piggy-back on other, better reputed pollsters’ names for credibility – a particularly loathsome form of ambush marketing that pushes you right up to the edge of Fake Pollster status as far as I’m concerned.

6to Poder Datos is guilty on all three counts and, for me, it’s three-strikes-you’re-out.

They get spared from the NAOR/Predictmática funeral pyre only because Eugenio Escuela does have a track record as a pollster, (though really I haven’t assessed it.)

Still, look at it this way –

With, you know, Francisco Ameliach and Nicmer Evans smiling for the cameras looking all clubby as Eva Golinger pullulated in the background.

How much credence would we give that poll?

Not very much, I bet.

I just think it’s very high on the sketch-o-meter, this one.

Juan here: Healthy skepticism is always welcome. But solve this, Miss Marple: if this is an encuestadora de maletín doing shill work for the opposition – how come it shows Chávez winning? I mean, if you’re gonna make up the numbers, at least make them up right.

Another thing I disagree with is in the application of your criteria. 6to Poder Datos may be new, but Eugenio Escuela isn’t – he’s been around for a long time. Therefore, this shouldn’t count as a pollster that all of the sudden came into the scene before an election. This guy has a track record, and you’re ignoring it just because he switched jobs or changed the name of the company.

For me, this one passes the smell test. Barely, but it passes it.