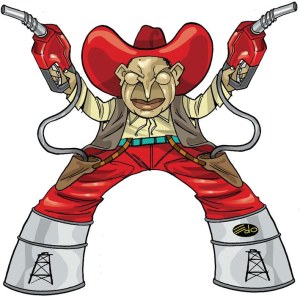 Over the last few months, as I’ve hoped against hope that a brilliant opposition campaign could somehow short-circuit the bedeviled logic [of the petrostate], one Chavista program kept bringing me back to a dour realization that it just wasn’t likely. The program, called “My well-equipped home,” essentially is an oil-for-appliances deal signed with China under which over 1.3 million Haier brand appliances — stoves, washers and dryers, flat-screen TVs — were distributed to government supporters at deeply discounted prices. Chávez’s face is, as you’d expect, stenciled right into the program’s logo.

It was a brilliant gambit, cynical and effective. Imagine, for a second, your life without a washing machine. Then imagine how thoroughly it would be transformed if you suddenly got one. Now multiply that by 1.3 million households, and you begin to see the extreme, possibly insurmountable structural advantage an incumbent has in a reelection race in a petrostate.

I really think Mi Casa Bien Equipada was like the Sleeper Issue of the campaign: silent but deadly.

That last link, incidentally, leads to an amazing TED Talk that everybody should take 9 minutes to watch.

When Scholars Lie About the Crisis in Venezuela