Juan wrote a great article today with some really appalling numbers. 817 cars produced in February. January wasn’t great either. The first two months Venezuela produced 1,539 cars. But let’s not weep too much: for much of the last decade and a half, Chávez’s radical-castrocommunist policies created a kind of heaven for these transnationals.

CADIVI was the apogee of rent sucking technology ever devised by human kind. And we loved it while it lasted. From airlines to raspacupos, there hasn’t been a golden era like Chávez’s era for the ta’ barato dame dos set. The key technical improvement to our rentist mechanism is the incorporation of corporations, particularly foreign, into it with a direct, streamlined hose.

Let’s see how those poor car companies have done.

That’s the data available at CAVENEZ at the publication date.

To complement this data I have a couple more appalling numbers. Do you know who was the number 1 beneficiary from CADIVI between 2004 – 2012? Let me tell you. General Motors. General Motors received $5,910,439,377. Toyota was number 4 and Ford was number 5. Let me show you how car companies divided the cake: 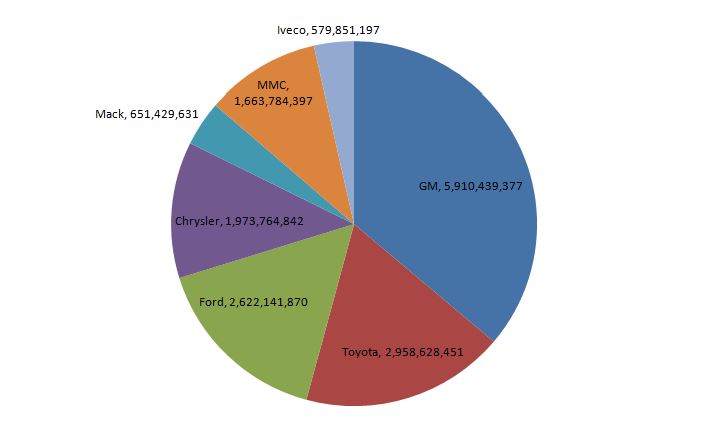 In fact, the companies that make up CAVENEZ add up to $$16,360,039,765 which is roughly 9.2% of the total amount of cash dispensed by CADIVI. The total number of vehicles sold in that period by those same companies is 1,411,729. If you divide by the total amount of money you get an average per vehicle cost of $11,589. Of course, sold at a market prices, these car companies wrecked the cash in. But how much of the actual cake is this?

I don’t buy it that car companies didn’t know this was coming. They did their cost-benefit analysis I the numbers looked leafy green.

Yes, they played by the rules. I know that, you know that. Those who created the rules are to blame for this. Not the car companies. Not you, not me.

One thing is clear. Car companies are not the victims here, they surely benefited.

All of us, living in Venezuela, saw our oil revenue subsidizing foreign car companies instead of supporting schools, hospitals and roads. We are the victims here.