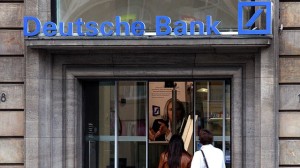 So Anabella and Barbara, I think you’re right, but you still go to jail. The Planning Ministry powerpoint leaked to ABC.es certainly made for some juicy reading showing how bad things got over the last year and a half.

But then, we always knew it wasn’t going to be pretty bringing the economy down from the fevered sugar high of 2012, when ministers decided to send Chávez off in style by buying him the kind of re-election victory only a genuinely insane public spending spree can secure.

What’s notable about that powerpoint is just the fact that, in Venezuela, you need a high profile leak to get the kind of humdrum public information sane countries just publish as a matter of course. (Well, that and the execrable graphic design skills of the flunkies who made this visual atrocity.)

Sustainable. It’s a funny word. Enviro-ness has endowed it with a certain positive spin it doesn’t really deserve. Lots of horrible things are sustainable, in the basic sense that if no outside force intervenes it can just keep going on forever. Childhood blindness caused by Vitamin A deficiency is sustainable in Burkina Faso. Black Lung Disease mortality rates are sustainable in West Virginia. And, I’m afraid, chavista economic management is getting sustainable in Venezuela, too.

Take Deutsche Bank’s latest Special Report on Venezuela. Nobody would confuse it for a ringing endorsement of chavista economic management. The most laudatory thing they say is that Ramirez and Merentes are probably driving us towards stagflation rather than hyperinflation. These people are bad at their jobs: that point’s not really in doubt. The question is, are they sustainably bad at their jobs?

For Deutsche Bank, the answer looks like yes. After a massive reduction in import volumes, the government’s figured out a way to patch up its fiscal problem through a messy, ugly, hairy devaluation.

“SICAD II – through which the government implements stealth devaluation with minimum political cost – will likely be a successful policy move. It helps reduce exchange rate distortions, improve fiscal balance, and attract foreign investment (especially benefiting the oil sector), as well as reducing the need for monetization of the fiscal deficit through PDVSA (though it is expected this policy will continue) and allowing the private sector a formal way to access foreign currency, putting a stop to the depreciation of the parallel exchange rate.”

None of this has been done out of conviction, just out of the plain arithmetic impossibility of balancing the books any other way. But will it “work”, at least in the limited sense of ensuring Venezuela keeps paying its bonds, that inflation stays in two figures (rather than 3 or 4), and that the economic day-to-day remains merely deeply screwed up rather than escalating to simply unmanageable? It looks like Deutsche Bank like the answer is yes.

The government’s paid a high political cost for the adjustment it’s had to roll out in the last 13 months. Yet its decision last month to quietly, without great fanfare, revise prices for a slew of controlled goods sharply up suggests to me that at least the single most obnoxious part of the economic conundrum – scarcity – could improve significantly in the short run. That, together with moves that should ease the fiscal crunch and ease some forex backlogs at the same time isn’t going to win anyone any Finance Minister of the Year awards. But it could be enough to stave off the type of outright collapse that looked very possible not that long ago.

Deutsche Bank thinks they may even be trying to give themselves room to go back to expansionary policy in the few months ahead of AN elections next year!

“The Venezuelan economy is undergoing a sharp economic adjustment – although incomplete, it will allow economic authorities to restore a healthier external balance favoring external (financial) creditors while putting the burden of the adjustment on the domestic sector, where stagflation will be the most likely outcome for 2014. We argue that the adjustment is incomplete because neither the fiscal and monetary policy imbalances nor the lack of confidence from the private and external sector in the economic policy mix will be sufficiently addressed. But this year will allow economic authorities to build buffers ahead of the National Assembly elections in late 2015, when we expect the expansionary domestic policy to return with a resurgence of imports to combat scarcity.”

Look, it’s a miserable policy mix, that much is plain. As long as the Law on Fair Prices and LOTTT stay in the books, there’s no hope at all for any kind of productive sector resurgence outside the oil sector.

So we’re looking at ongoing, deepening dependence on energy exports, leaving us badly exposed to medium-term risks on oil prices. All it will take is a future where Libyan oil is back in the market or Keystone XL gets the green light or Mexico finally adopts a serious energy reform for production values to spike, the price of oil to come down 10 or 20 or 30/barrel and then it’s very much a llorar pa’l valle: another round of adjustment, more protests, rinse, lather, repeat.

We have no Plan B, no resilience to shocks, no hope for sustained improvements in livelihoods. But also little sign that any of that could imperil chavismo’s hold on power, or on the sweet, sweet rents that hold brings.

I think that’s a settlement they’re more than willing to go for. Don’t you?