Dear underpaid intern at the State Dept. stuck in the Venezuela desk having to file reports about the BRV’s response to the president’s Executive Order,

I feel for you. I really do.

In the scheme of things, with Putin issuing nuclear threats to Denmark, ISIS spreading terror like it’s ebola, and China’s looming financial domination of your country, who has time for a shitty, if colorful, dictatorship? For the longest time, Venezuela was just an inconsequential blip on your Latin American radar, the place Juan Valdéz and guacamole and Sofía Vergara come from…and now President Obama had to go and make it all newsworthy.

I’m sure all the silly exchanges initiated by our Foreign Ministry, which you’re professionally bound to act as though you cared about, make for great dinner table chatter: just the stuff to show your parents just how kooky your job can be. Never mind you’re silently fuming about how your $140k Georgetown School of Foreign Service degree should’ve somehow spared you from gopher tasks like having to take our Foreign Ministry seriously.

People tell you if you brave a few years of this, and a few more manning the visa line at a consulate at some shithole somewhere, you can maybe get your foot in the ladder and get a real diplomatic career going at some point down the line. That may even be true. For now, you just gotta get those student loan payments in on time while being expected to know who the hell Hany Kauam is.

I get how you might be feeling undervalued and useless: grad school was nothing like this. Remember? Immersing yourself in case studies about transitional democracies? Remember role-playing the Cuban missile crisis? Remember how eager you were to finally start making an impact on the world through foreign policy? Then you drew the turd card in a deck of rainbows: the Venezuela desk, in the Maduro era.

Since it’s only a matter of time before you get jaded and start rethinking that cushy private sector job offer from the Standard & Poor´s recruiter, let me give you some sound advice that I learned from years of being Venezuelan: lower your expectations.

When the U.S. decided to take action and sanction a handful of corrupt government officials who violate human rights, I bet you expected, at minimum, a properly hate-filled anti-American diatribe in response. It’s only fair that your commitment to imperialism be met with an equally bold, defiant, and serious reply, something on the level of this:

Those were the good old days. These days our creativity in anti-imperial mudslinging is as devalued as the bolivar.

All you’ll get out of us these days is a silly hashtag: #ObamaDerogaElDecretoYa.

Credit where credit is due, our government is at least being resourceful. Its not easy coming up with a multimedia counterattack strategy when you are dealing with the worst economic crisis in Venezuelan history and half of your ministers spend their days too busy laundering money to do their jobs. Yet somehow, in between persecuting opponents and torturing students, SIBCI managed to come up with this:

Daniela Cabello took a break from her meteoric ascent to pop stardom to dabble in copyright infringement:

Just yesterday, after paying my taxes at Mata de Coco, I was frantically approached by a government activist asking me to sign a petition rejecting a U.S. airstrike (I can contribute to our national treasury and stave off obliteration through precision bombs? awesome!) 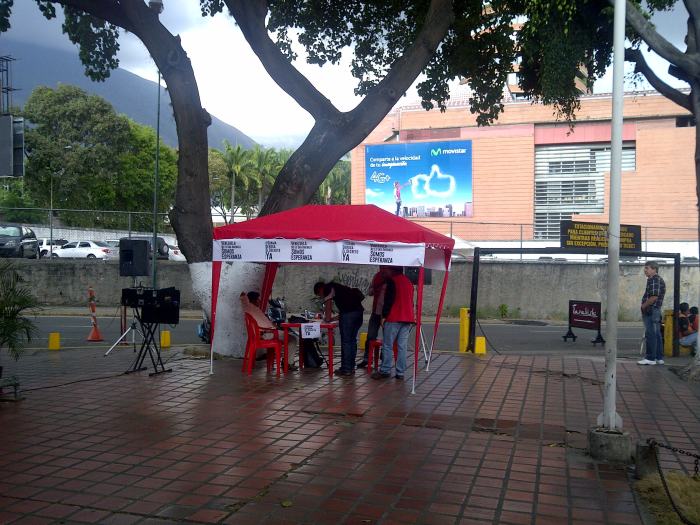 Not to be outdone, Venezuelan consulates throughout the world kindly invited expats to join in the fun:

And finally, lest the little ones feel left out, the Ministry of Education also included Obama-bashing in the arts-and-crafts public school curriculum.

So there you have it: a textbook blend of amateur fear mongering, mediocre misinformation campaigns and cliché marketing all working hand in hand to make you shove your sanctions where the sun don´t shine. Underwhelming, I know. You deserve better.

But not all hope is lost.

At times like these, my dear State Dept. intern, when your dedication to interventionsm isn’t getting the respect it deserves, I always look to the MUD for comfort. The opposition umbrella group always manage to set the bar, and my expectations, a little lower.

Because while you cannot fault the Maduro government for shoddy execution (it’s not like they’re  making a secret of their worldly limitations), the Mesa de Unidad likes to pretend they’re knowledgeable and rational about their policies: the technocracy-in-waiting.

But rather than being smart and leveraging the moment to bring as much international attention as possible to the desperate situation of Venezuelan democracy (a task at which we have consistently failed), rather than seizing the moment to condemn State officials involved in torture, money laundering, drug-trafficking and stupendous corruption, rather than exposing the web of silence that regional allies of this government gladly maintain, rather than addressing the impunity that has consistently eroded the credibility of our institutions, rather than gaining an upper hand in shifting the political narrative to the offensive… the MUD chose to issue this communiqué and further speculation that your plan to invade us, dear State Dept. intern, is very much alive.

To sum up, I suggest that as long as your higher-ups at State are still game to overthrow the Venezuelan government, and in order to spare you unnecessary frustration, look to the MUD, and not Maduro, to convince Venezuelans of your objective. While they may lack the resources and media access to get their point across, rest assured that they are obstinate in their resolve.

Listen, ten years from now you’ll be sitting in, like, the Middle East Desk, doing real diplomacy, and this whole Venezuelan farce will seem like a distant dream to you. Just hang tight. It’ll end. For you, at least, it will end.