The images, undoubtedly painful, have circulated for days: Chileans protesting the presence of hundreds of Venezuelans in Iquique—a town on the border between Chile and Peru— made a bonfire with the migrants’ belongings, including toys and a stroller. The Andean region, in general, stands with Trinidad and Tobago with the largest amount of news about xenophobia against Venezuelans. Things, as always, are more complex than they seem.

Using the figures from the R4V Platform, we examine the spectrum that goes between hostility and welcoming reception among the host countries with the largest Venezuelan migrant communities. We recommend taking the following criteria into account: Outside of some deportation cases considered unfair by those involved, there haven’t been any xenophobic episodes reported against Venezuelans. The country’s government doesn’t recognize the Maduro regime as legitimate and this generates consular complications: for example, as in the case of the United States, today there’s no Canadian consulate or embassy in Venezuela. Although Canada is a developed economy, with a public opinion favorable to immigration, migration processes are costly, slow, and demanding, and have become more so since the pandemic. Venezuelans with refugee status, work permits or residence enjoy the same rights as all other inhabitants of the country. There are Venezuelans working in many fields, but it’s a small community with no significant impact on the country’s politics or economy, compared to others. The government doesn’t recognize the Maduro regime as legitimate and that generates consular complications. In the United States, apart from isolated cases, the environment isn’t xenophobic towards Venezuelans. In both Florida and Texas there are strong communities that have been established for a long time. Due to the difficulties to enter the country, very few have arrived in extreme situations. Many people who emigrated using tourist visas or requesting asylum without meeting the requirements to receive it were able to apply for TPS and regularize their situation. However, approximately 17,000 have entered the Mexican border on foot in Del Rio, Texas. Many of them manage to cross undetected, but others end up in immigration processing centers. Cases of deportations to Mexico have recently been reported.

In the 2020 presidential election, Venezuelans were part of the discourse that helped Donald Trump grow stronger in Florida. On the other hand, at least two people of Venezuelan origin are working for Joe Biden’s government. The community continues to get stronger economically and politically, but emigrating remains difficult and costly. The named benefits, TPS and DED, are only valid for Venezuelans who were in the country at the time they were granted. In the most populated Spanish-speaking country in the world, Venezuelans haven’t been particularly recipients of xenophobia. There are numerous Venezuelans settled there in various economic and cultural sectors. Some migrants have suffered abuse and arbitrariness by the migration authorities, such as refusing access—within the policy of Andrés Manuel López Obrador’s government to help reduce migratory pressure on the United States. This same government, relatively close to Maduro’s, is open to granting refugee status to Venezuelans. Venezuelan migration began several years ago, along with the migration to Costa Rica and Panama. Entrepreneurs and professionals were followed by Venezuelans working in many other sectors of the economy. The new government launched a normalization plan to facilitate the integration of more than 40,000 Venezuelans with irregular status. Although in practice full regularization is difficult due to the restrictions on residence visas, there have been few gestures of hostility towards Venezuelans. 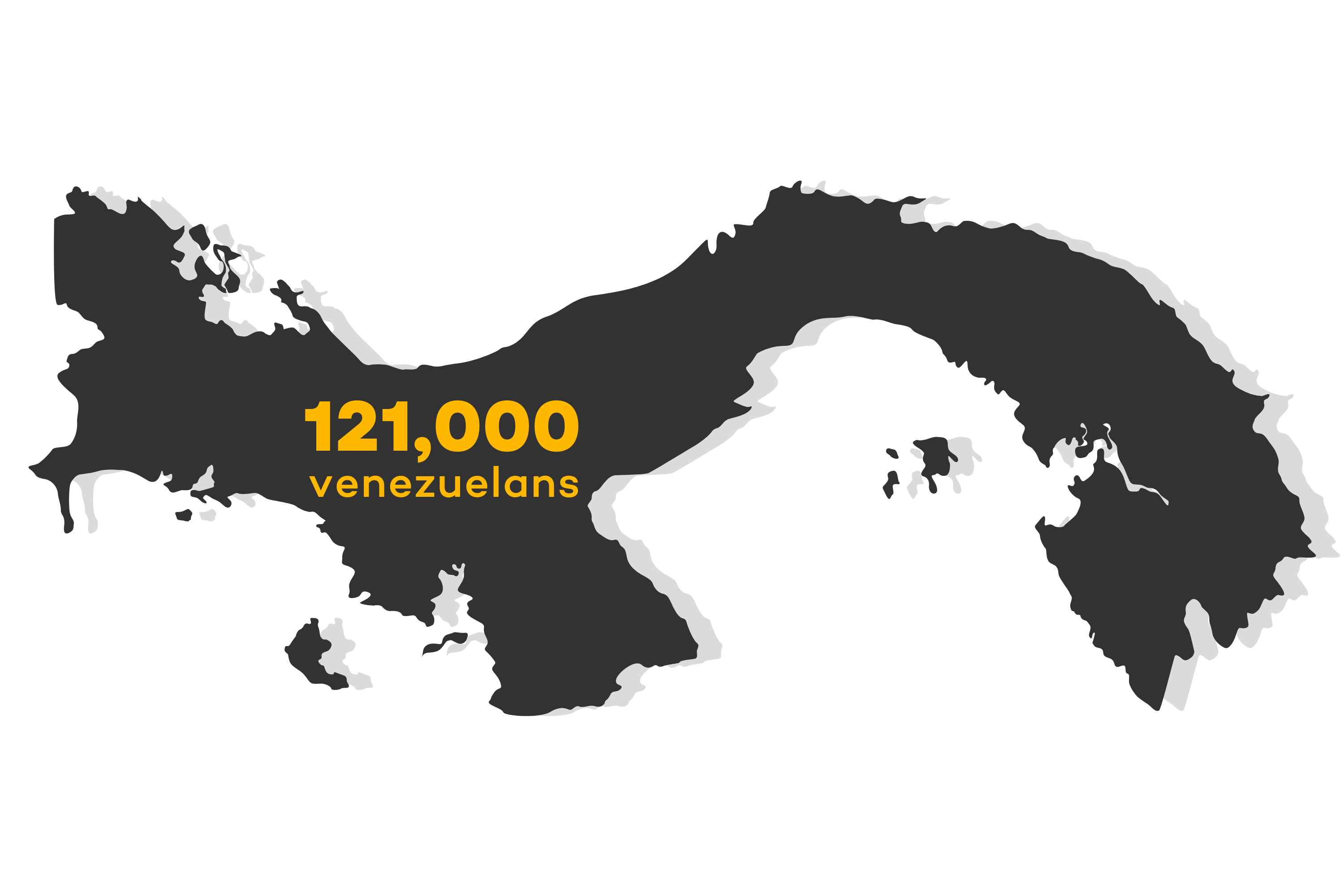 In one of the countries that first began to receive Venezuelan investment and immigration, the combination of little experience in receiving immigrants and strongly restrictive laws for the integration of all foreigners to many activities helped to develop a hostile climate towards the Venezuelan presence, that has been the subject of nationalist protests and a strong discourse on social media and by some political actors. There are even stamped visas only for Venezuelans and numerous limitations to integration, such as the cost and duration of permits and residences. At least 20,000 Venezuelans live in Aruba, Curaçao and Bonaire, not counting the people who come and go by boat, or those who try to stay illegally. That’s a lot of people for such small islands, even if those islands are used to hiring foreigners for their tourism industry. The volume of Venezuelans who stay there beyond the time allowed in their visas, even if it’s working in places where they are exploited, has generated significant tensions and challenged these governments’ capacity. While in Venezuela they only talk about Guyana regarding the claim over the Essequibo territory, there are more Venezuelan migrants there than in Canada. They pass through the jungle and maritime border and they are Guyanese, Oriental, Guyanese with dual nationality and Indigenous, most of them Warao. More than half of this migration is made up of women, who survive in that country with very precarious jobs and conditions. The State and civil organizations have made great efforts to attend to the enormous flow of Venezuelan migrants through Zulia, the Andes, the plains, or the Amazon, part of them in transit to other countries. Criminal organizations are also known to smuggle migrants or forcibly recruit them. Colombia is the country where most Venezuelans have been victims of femicide, according to a map of Venezuelans killed abroad, and where more migrants have been killed. Acts of xenophobia and the political use of the figure of Venezuelans as a threat are common, as the mayor of Bogotá has shown many times, whose speech accusing Venezuelan migrants as a factor of insecurity is echoed on social media, as proven by the Xenophobia Barometer project. The use of recent Venezuelan history as a positive or negative reference is a fixed component of Colombian politics. There are thousands of binational families or families who returned to Colombia after having been emigrants in Venezuela for many years.

We talked about the Colombian TPS for Venezuelan migrants on this episode of our podcast. The Trinidadian government is continually expelling Venezuelans from its shores, and Venezuelan society has been shaken by tragedies at sea caused by the crossfire between a hostile Trinidadian government, an irregular economy of migrant smuggling from Sucre and the Delta, and a State that abandoned its own people to their fate. However, there is another side of the coin: thousands of Venezuelans live in Trinidad and Tobago, working in different things (it’s common to see them serving restaurants) and sending remittances even when there are employers who take advantage of the vulnerability of the migrant without legal residence. Trinidad is also impacted by Venezuelan criminal activity in its waters, a fact that actors who encourage xenophobia use to their advantage. The first public acts of xenophobia and attacks on migrant camps in border towns such as Paracaima and Boa Vista occurred in Brazil, but it isn’t a hostile country: La Operación Acogida (Operation Welcome) has allowed thousands of Venezuelans to receive humanitarian aid, find work and reside in different regions of the country. In this case, the fact that the government of Jair Bolsonaro doesn’t recognize Maduro hasn’t prevented the attention of Venezuelan migrants. In this country of immigrants and non-immigrants, which was already in an economic and social crisis when almost half a million Venezuelans started arriving, there have been serious xenophobic incidents, especially in the population of Ibarra, and a general climate of distrust and discrimination towards Venezuelans, from migrants who arrive by land to academics hired and then exploited or fired by Ecuadorian universities. Like in Peru, Venezuelan migrants in Ecuador are accused of being criminals or undesirable migrants. Venezuela is a scarecrow in the political discourse, and many stories of labor exploitation, discrimination when renting a home, violation of rights, and even sexual abuse are reported. A special Ecuador-Venezuela statute contemplates the possibility of applying for permanent residence visas, which have numerous requirements. In the country with the second highest Venezuelan migration in the world, xenophobia has been a constant: demonization in the media, on social media, and in politics; numerous acts of violence; a hostility so evident that it has served the regime that provoked that same migration to use for propaganda, in the so-called Operation Vuelta a la Patria.

Although the positive economic impact of migrants is documented, the lack of institutional and social traditions of receiving immigrants in a country of emigrants like Peru, and the fact that this migration has occurred during an economic decline and a pandemic, has made things very difficult for hundreds of thousands of Venezuelans who arrived by land. Along with Ecuador, Chile, Trinidad, and Colombia, Peru is one of the host countries that’s most hostile to Venezuelans. There’s no reason to think that this hostility will disappear with a government close to Maduro, like that of Pedro Castillo, nor that it would have disappeared if Keiko Fujimori had won.

This Andean and Amazonian country is also used as a country of passage to Chile and Argentina, and as a host country, although with slow and expensive procedures for a very vulnerable migration that finds few economic opportunities through the informal economy. The MAS governments, close to the chavista regime, haven’t favored the integration of Venezuelan migrants. And in a country with a poor population and no reception experience like Bolivia, there have been tensions but not on the scale that there are in Ecuador, Peru or Chile. During the protests that took place in Chile in 2019, fake news and misinformation linked Venezuelans to looting and fires, while part of the Venezuelan community became involved in the polarization by defending the repression. There were banners such as “Immigration is part of the problem,” referring to how it affects Venezuelans. During the plebiscite to approve the constitutional reform, the government used the case of Venezuela to sell the idea that constitutional reforms are negative.

Then, although a large number of professional migrants have been able to integrate very well into the Chilean workforce, the pandemic highlighted the number of Venezuelans who depend on informal jobs to survive. With the new increase in migration, of people coming from Venezuela or from other countries where they had been trapped during the lockdowns, the most violent episode so far against Venezuelan migrants in Chile occurred in Iquique, a border city in the north of the country. Some 5,000 people participated in a protest against Venezuelan and Haitian immigrants that ended in beatings and the burning of the tents and belongings of homeless immigrants. A general climate of xenophobia against Venezuelan migrants isn’t reported, beyond terrible episodes of abuse such as the one committed against a Venezuelan girl who generated an important mobilization in Buenos Aires (in reality, our migrants are vulnerable everywhere, what varies is the degree of vulnerability). As in Spain, the United States, and Canada, there are numerous Venezuelan businesses in Argentina. In the small country of Uruguay, the problem isn’t getting or obtaining legal status to access education and health and to be able to work. Neither is dealing with xenophobia; the majority’s opinion on Venezuelan migrants is positive, as in Argentina.