The opposition march today was large, peaceful and very emotional. Torture and mistreatment victims spoke to hundreds of thousands over loudspeakers, sandwiched in between the politicians. There was a large security presence just beyond the boundries set out by the military for the marchers: neither side provoked the other, for once. 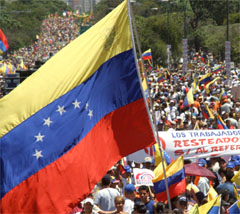 Perhaps Chavez has finally realized that the best way to discredit the opposition leadership is to let them give speeches. By and large, they are amateurs of the harangue, minor leaguers compared to his Sammy Sosa status. They’re just not even close.

The speeches of Antonio Ledezma and Henrique Salas Römer, in particular, raised some alarm bells for me. “Speech” is the wrong word for them really, they were more like strings of antichavista strung one after the other and shouted into a microphone at the top of their lungs. The adeco style shout-fests had no real logical ordering that could pass as an argument; it really looked like an anachronism. It was a sad spectacle, and a sad comment on the opposition. I’m sorry for any PV readers here, but man, y’all need a better candidate than that.

Pompeyo Marquez, the venerable 83 year old ex-communist leader and voice of the left’s conscience reportedly gave a decent and sensible speech. He was the one come-flor voice in an afternoon dominated by talibanes. Pompeyo retains a certain moral authority that’s hard even for opponents to overlook.

Meanwhile, Felipe Mujica of MAS had a tough task ahead of him. He wanted to keep the Coordinadora’s options open, but couldn’t let anyone else out-antichavez him. With a politician’s practiced skill for strategic circumlocution, he at least tried to leave a window open for possibly going to reparos. But he obviously felt obliged, given the emotional tone of the crowd, to crouch this argument in the most aggressive antichavista terms he could think of. The crowd would have stood for nothing else. 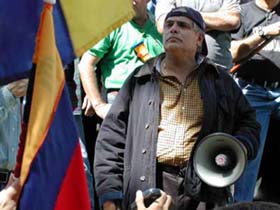 Miranda Governor Enrique Mendoza, our president in waiting, looked frankly the worst of bunch, even though he had the best speech. Mendoza can talk about social issues with some authority, because in Miranda he has a real track record to defend. And to his credit, he did talk about this political struggle as a fight for the 2.8 million unemployed and the 4 million in most critical poverty who do not know where their next meal is coming from.

It was a good effort, and it might even have been effective, had it not been shouted in a baritone shriek into the microphone. Once he’d gotten going, Mendoza literally panted into the microphone with each breath, gasping loudly for air and looking like nothing so much as a grandfather who has worked himself up into such a fury that he’s about to give himself a heart attack. Two words: not presidential.

So there was little joy in watching the speeches for me, or at least for my inner come-flor. At times the speechifying drove me to the very edge of Ni-Ni territory, a frightening idea. If the opposition is turning off people like me with their cabeza caliente rhetoric, what chance do they have with the waverers, with the real ni-nis?

The thing about polarization is that each side ceases to believe the other side exists. If they’d let me anywhere near that microphone I would’ve gotten up and said something like.

“You know, there are eight million chavistas in this country right now who don’t believe this event is happening because it’s not being shown on State TV? And you know what else, they’re Venezuelan, just like you and me. They eat the same arepas with the same diablitos, they drink the same polar, they go crazy over the same baseball teams, they have kids and uncles and cousins just like you who they love and cherish. Really, they’re just like you. It’s senseless to make them the enemy, because even today the majority of them are decent people, earnest in their beliefs. But also because in 25 years they will still be living in this country, just like you’ll still be living here. The goal here is not the referendum. The referendum is a means to an end. National reconciliation is the end.”

Not of course that the Coordinadora would let me anywhere near a microphone, and perhaps for good reason.