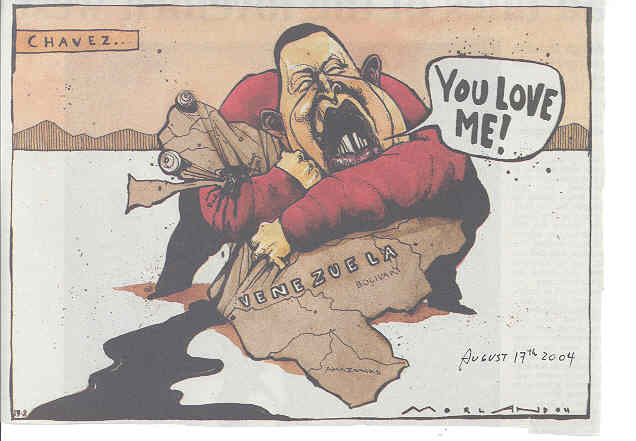 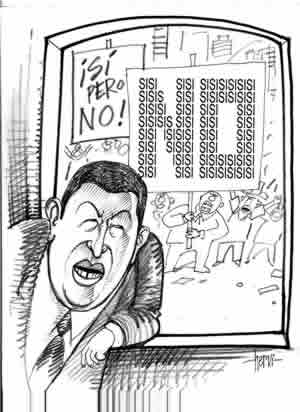 There’s people who cannot be fooled by the tricks of oil-rich authocrats like Hugo Chávez. The authors of these two cartoons hail from two very different places. The first was penned by a canadian, the second one by a chilean. They perceived what a substantial percentage of the Venezuelan population has perceived: There is government foul play in this referendum, driven by an addiction to power unhealthy in any tried and true democrat.

Certain forces inside the Chávez camp might have pulled a fast one on the OAS, the Carter Center, the international observers (not all of them though) and the international community, but what’s really damaging to him and his entourage is he with the help of his cronies Carrasquero, Battaglini and Rodríguez set up the Venezuelan people to be duped by a less than stellar electoral process which has a lot of loose ends right now.

So here’s a word to the wise: this government has done the unthinkable, it has broken the faith of people in the institution of suffrage. People will have a hard time embracing peaceful democratic solutions because they have been deceived and disappointed by the actions of a cabal of fundamentalists and opportunists who see the State as means to an end: power and money.

Hugo Chávez might heve gotten away with it this time, but some venezuelans have learnt the hard way you can’t always entrust men like Chávez with power.

To Quico: stop questioning yourself. You’re right and you know it.

To the InChBrig: One day we will remember this and laugh about it. You on the other hand will keep telling yourself that Hugo was a patron saint of democracy and the poor when you know it’s bullshit.