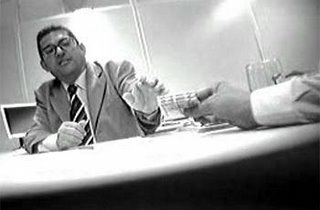 In Brazil, this video showing a Post Office official receiving a $1,000 bribe sets off a massive scandal which dominates the media for months, brings the government to crisis, and genuinely shocks the nation. Two thorough investigations are launched in parallel – one in congress, the other at the Prosecutor General’s Office. Names are named. Two dozen high-ranking party and government officials lose their jobs. Charges are brought. Once powerful people face jail time.

In Venezuela, the Interior Minister says the Supreme Tribunal Magistrate in charge of keeping the courts free of corruption stole $4 million from the state. The Magistrate hits back saying the minister and his brother are also stealing from the state, as are many others, and that the Caracas area court system is run by a network of midget judges payed off by drug traffickers. Both the minister and the magistrate say they have tapes that can incriminate the other, but neither makes them public. The media yawns it off – it’s a one day story. No discernible investigation is launched. The minister and the magistrate keep their jobs. Jail time? Ya, right…

How could it come to this? How can we explain the abysmal difference between the way the PT Votes-for-Cash scandal played out and the way the Luis Velasquez Alvaray scandal is going? It’s clear to me that, in some objective sense, the allegations surrounding LVA are far more seriously than anything that got pegged on the PT. But it simply has no consequences. The conveyor belt linking crime and punishment is irretrievably screwed up in Venezuela. Our institutional fabric is so frayed that the most fantastic allegations come and go without ever quite making contact with reality.

That may sound melodramatic, but I don’t think it’s an overstatement: how can a country keep any sense of morality when anti-corruption posturing becomes the corrupt elite’s favored tool for settling scores? Because, notice, both Jesse and LVA position themselves as palladins of bolivarian morality, both portray their accusations as a function of their deep commitment to fighting corruption.

What’s tragic is that Venezuelan society has no way to defend itself from the violence the bolikleptocracy is doing to it. The institutional mechanisms that Brazil managed to muster to bring PT wrongdoers to account long since stopped operating. Like a starving child too weak to swat away the flies that land on his face, our society is too morally emaciated to do anything about the LVA affair, and the dozen others like it doubtlessly brewing just beneath the threshhold of public awareness. It’s a sad, sad thing…