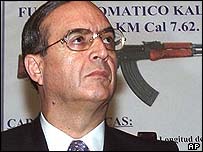 A blast from the past: Vladimiro Montesinos, the one-time power-behind-the-Fujimori-throne in Perú, has been convicted to 20 years in jail for secretly selling 10,000 guns to Colombia’s main communist guerrilla, FARC.

Montesinos, you may recall, spent the better part of a year hiding out in Venezuela directly after the Fujimori regime collapsed. With very evident high-level support, Montesinos was personally guarded by two DISIP (intelligence police) agents – Rolando and Otoniel Guevara, now in jail for the murder of Danilo Anderson. Their involvement in the Montesinos cover-up was flushed out by opposition journalist Patricia Poleo, who was later – bizarrely – accused of conspiring with them to murder Anderson. (If you find all this impossibly confusing, you are in, erm, ample company.)

The point? Put him in hands of independent investigators, and JVR’s secret buddy – and, one can’t help but suspect, role model – it turns out he was arming FARC. (Plus, remember, Montesinos was nominally right-wing.) So, when we fret that Venezuela’s Kalashnikov purchases are going to end up in narcoguerrilla hands, are we paranoid, or merely realistic?