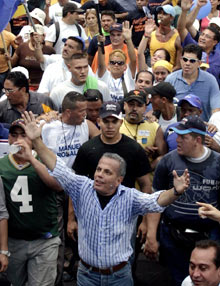 Katy says: There are several reasons I just had to reprint this latest article from The Economist. One, it recognizes the enthusiasm of the Rosales campaign and acknowledges some of the governor’s best traits, including his endearing wife. Two, it is realistic about his chances but nevertheless sees this campaign as an important step in regrouping the opposition. And three, it mentions Maracaibo in the title. How cool is that?

At last, the opposition to Hugo Chávez finds a star of its own

JUST a few months ago, Venezuela’s opposition was divided, apathetic and nervous. With a presidential election due on December 3rd, Hugo Chávez, who is seeking a fresh six-year term, was flush with petro-dollars and riding high in the opinion polls. The dozens of small political parties and pressure groups that make up the opposition could not even agree on a method for selecting a candidate. Many thought the election was so heavily rigged in Mr Chávez’s favour that the only sensible option was to boycott the whole process. A similar ploy in December last year had left the 167-member National Assembly without a single opposition member.

Step forward Manuel Rosales, the governor of the western state of Zulia, whose capital is Maracaibo, the country’s second city. He has never lost an election since becoming a local councillor 27 years ago. As a provincial politician with his own power base, he was freer than most rivals to cut through the backroom deal-making, heavily influenced by media bosses, that has blighted opposition politics in recent years. He skilfully outmanoeuvred the abstentionists, securing the candidacy and the support of almost 40 political groups.

Since then he has criss-crossed the country, striding through poor neighbourhoods from the Colombian border to the Orinoco delta, hugging old ladies and kissing babies. On November 4th several hundred thousand supporters accompanied him on a 26km (16 mile) march across Caracas. That was reminiscent of the mass rallies against Mr Chávez between 2002 and 2004. The opposition’s troops are in good heart. Even Mr Chávez, used to dictating the political agenda, has been forced partly on to the defensive.

So can the president be defeated? Probably not. Many of the polls are biased to one side or the other. But the best guess is that Mr Chávez retains the support of at least half the electorate, with Mr Rosales probably 20 points behind. Since the president, a former army officer who led a failed coup in 1992, was first elected in 1998 the voters have consistently split about 60:40 in his favour. With abundant oil revenue at his disposal and no budgetary restraints or institutional checks on his power, Mr Chávez is a tough opponent.

But Mr Rosales has landed some punches. Mr Chávez spent much of this year touring the world doling out gifts in a failed bid for a seat at the United Nations Security Council for Venezuela. Rather than the “anti-imperialist” struggle abroad, says Mr Rosales, what needs attention is rampant crime, a housing shortage and persistent unemployment at home. His campaign features a debit card which he says he would use to distribute 20% of oil earnings directly to the poorest members of society. “That’s much less than what this government has given to other countries,” he claims.

The card could be a vote-winner. Polls show big majorities against the foreign handouts Mr Chávez uses to gain allies for his crusade against the United States. That, in the view of his opponents, was why Mr Chávez this week snubbed London’s mayor, Ken Livingstone, cancelling his planned trip to Caracas at the last minute. The British leftist was to sign a deal that would swap cheap diesel for London buses for advice on crime, waste disposal and the like. Venezuela’s foreign minister will now sign the deal in London.

Mr Rosales lacks Mr Chávez’s skill as a communicator. But like the president, he comes from a humble background. Unlike him, he is happily married. Several of his ten children are adopted. His wife Eveling is an accomplished campaigner. The government derides him as a typical product of the discredited pre-Chávez era. But he broke with the dominant party of that era in the early 1990s. If he can create a strong enough organisation to hold the opposition together even in defeat, he will have achieved more than its last two presidential candidates. There will be opportunities ahead. With deepening social discontent and falling oil prices, Mr Chávez’s “revolution” is likely to run into trouble.