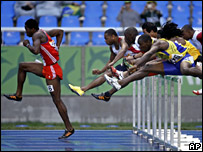 BBC says: Cuban athletes have made a hurried departure from the Pan-American games in Brazil, apparently amid fears of possible mass defections.

The delegation was rushed at short notice to Rio de Janeiro’s airport, leaving the men’s volleyball team no time to collect their bronze medals.

The athletes were said to have been ordered to leave the games before the finishing ceremony on Sunday.

It follows the defection of four Cuban athletes earlier in the tournament.

Such was the speed of the departure that some athletes were said to have had difficulty finding their luggage.