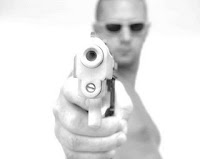 Juan Cristobal says: – The government is confiscating Venezuela’s largest cement company. Our readers are incensed. Some are wondering when we are going to write about this latest outrage. So here it is: it’s not that important.

Tonight, the Chávez government will take over the Venezuelan subsidiary of Mexican cement giant Cemex without paying a penny in compensation. Cemex was understandably reluctant to accept the imposition of unfair business terms and become minority shareholders in a joint venture with the unreliable Chávez administration. In this high-stakes gamble, Chávez has decided to take over the entire operation, and the Mexicans have probably lost big-time.

In any other country, this would turn on alarm bells. But in Venezuela, alarm bells have laryngitis.

There is nothing in this operation that we didn’t already know. Is it illegal? Yes, it is. Is it unprecedented? No, it is not. Was in unexpected? Nope. Does it signal a shift in the Chávez government’s war on private property? No, it confirms a trend, one that has been publicly announced by the President over and over again.

Cemex was once the mighty Vencemos, the brainchild of legendary Venezuelan businessman Eugenio Mendoza. In a country with very little private industry, Vencemos was the trailblazer that built an empire, a symbol of what Venezuelan entrepreneurs could accomplish.

But that was long ago – the Mexicans bought it out in the 90s and most of the romance of the old company is simply gone. Up until today, it had been transformed from a national champion to the well-managed local branch of a huge multinational. Its symbolic value is muted at best.

The question, then, is whether this is actually good policy. The easy answer here is that no, it is not. The government’s dismal failure in home-building cannot be attributed to fictional cement shortages – the cement has always been there for the taking, and the government has always been able to buy it. In fact, buying it would have been much cheaper than buying entire cement companies, which is what the government is doing with Cemex rivals Lafarge and Holcim.

It’s not lack of cement that’s holding the government back. Stealing cement companies is not going to make 200,000 low-income homes build themselves.

Instead of investing in roads, access to water and sanitation services, the government decides to invest in companies it will surely trash. The first thing it will probably do is rename Cemex something like Cebol. Pretty soon we’ll begin hearing Cebol’s board asking for public funds to keep the company going. Shortages will appear and the company will march to its inevitable demise.

Some people think that Cemex and the other cement companies are part of a ploy to keep the opposition guessing and distracted. If it is, it’s surely an expensive one. Not only will these moves cost the government some money: think of the time it takes to negotiate with the companies, the workers, to name a board. Just today we had public statements from both the Vice-president and the Oil Minister. Don’t they have other things to worry about?

There is one piece of the puzzle that is blurry. Years ago, Chavez announced a joint venture with Iran that included building a cement factory. Needless to say, nothing came of it.

And yet just this past week we learn that Chávez wants to set up another cement joint venture, this time with Bolivia and Iran. Never mind that it makes absolutely no sense to export cement from Venezuela to Bolivia or Iran – could these imaginary cement factories be a cover-up for something else? Could Cemex (Cebol) and the other companies be covers for the traffic of illicit material? Only time will tell.

In the meantime, we are left with the takeover of Cemex. What does it boil down to? Another boneheaded decision by the government, one that will surely cripple the industry, cost Venezuelan taxpayers millions, scare away foreign investment, damage Venezuela’s reputation abroad and confirm that we are governed by a bunch of thugs.

So as troubling as it is, it’s just business as usual in the Bolivarian Revolution. There’s nothing in these news that we didn’t already know, no fear that hadn’t already been confirmed long ago. It sucks for the Mexicans, and it’s probably going to suck for the workers. For the rest of us, it’s been sucking for years now. Ho-hum.