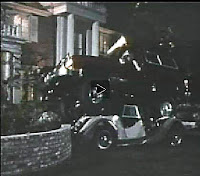 Juan Cristobal says: – In the movie The War of the Roses, Michael Douglas and Kathleen Turner play a succesful, picture-perfect couple. The years go by, the tensions in the marriage start to mount, and the irritating quirks they find in each other start growing to the point of becoming unbearable. By the time they realize they can’t stand the sight of the other, what should have been a civilized breakup turns into all-out war. Turner drives her SUV over Douglas’s tiny Morgan, Douglas kills Turner’s cat. When the movie ends, they have both destroyed their house, and they lie on the floor, lifeless, on the shattered remains of the chandelier that presided over their foyer.

I couldn’t get this movie out of my mind as I analyzed Chávez’s words and actions the past few days while the world witnesses an apocalyptic financial meltdown.

It is hard to overstate the seriousness of the current mess. Stock markets the world over are tanking and banks are failing left and right. Governments, central banks and multilateral institutions, normally the voices of reason, use incredibly dire language to describe the situation. The IMF talks of a “major downturn“, the Federal Reserve Chairman talks of a “grave threat” and the US President warns the entire US economy “is in danger.” Billions upon billions of dollars are being used to rescue the ailing financial system, and nobody knows whether this will even work.

The implications for Venezuela are dramatic. Oil is tanking, and according to Miguel’s calculations, we are already below the minimum price needed to pay for our imports. The black-market rate for the dollar is now 4.5 BsF, more than double the official rate of 2.15. Venezuela’s country risk has shot up to 1205 base points, liquidity problems in our banks have raised interest rates, and the cost of food increased 53.3% in the past year. It seems like the perfect storm we discussed about a few months ago has indeed formed.

And Chávez? Well, he’s as happy as a little girl.

See, Chávez has framed this as the final defeat of capitalism and the coup-de-grace of George Bush’s presidency. Faster than you can say “I told you so”, Chávez has been mouthing off left and right, going so far today to say that this crisis is “necessary” in order to “demolish” the capitalist system “that has caused so much harm to the world.”

In Chávez’s mind, a crisis of global proportions is good for him because it proves him right. He’s called on the big-bad-wolf of Latin American leftists, the IMF, to “kill itself.” Instead of warning people that changes may be necessary, he has promised to maintain currency exchange controls until 2020, blissfully ignorant that reality may force him to eat his words much, much sooner than that. In no uncertain terms, he has blamed this crisis on Bush, imperialism, the IMF, capitalism, greed and neoliberalism, going so far today to hint this vindicates Marx, Engels and Gramsci.

Now, we can’t blame the President for this hardly-contained bout of schadenfreude. These days, anachronistic ideological battles such as this are the only things that get his heart-rate going, and in part he is right, something is rotten in the system. But is it too much to ask for a little bit of glauckenstück?

Ideological warfare is entertaining and all, but this crisis is going to inflict serious harm on Venezuela. Much as he has tried the past few years to move the country to some alternative economic reality, the truth is that he hasn’t done a very good job of that.

Venezuela is still very integrated with the rest of the world. Our economy is more dependent on foreign markets than before, and there is some concern that Venezuela’s foreign reserves may be at risk. Moreover, basic economic intuition suggests that when the price of the one thing we have to offer to the world tanks, that is a problem. It doesn’t take a genius to realize that when the people who are actually your customers are being clusterfucked to the poorhouse, that is a problem.

Chávez is Nero, fiddling while Rome burns. The crisis has underscored just how deeply detached the President is from the day-to-day problems of ordinary Venezuelans. Instead of coming up with an insightful analysis of the crisis and its consequences for our country, he uses his bully pulpit to “nah-nah” the rest of the world. Instead of providing a solution, he gets busy travelling to obscure places, linking up with genocidal governments and shopping for weapons on borrowed money.

That is why recent polls show his candidates are trailing badly. Venezuelans don’t care about imperialism, capitalism and alternative economic systems. They care about bread-and-butter issues: inflation, personal safety, garbage collection, traffic and jobs. While most opposition candidates are doing a decent job in staying on message and talking about those things, Chávez is busy rejoicing in another Great Depression and travelling from Summit to useless Summit.

Chavez isn’t at war with the US, and he isn’t at war with George Bush – he feels like he won those already. Chávez is at war with his own people. While he fights imperialism and capitalism, he is doing nothing to prevent the fire from his battles from lighting up his own house. Like the Roses, he is so intent on destroying the other guy, the other idea, he doesn’t realize he is destroying himself, and us, in the process.

And for now, all we can do is watch in horror. As we watch our irresponsible, reckless President rejoice in the fall of capitalism, we realize we are all along for the ride.