Now that UNT has just one candidate, the time has come to update our Oppo Field Roundup.

At this point, the Top Tier is pretty clear:

Pro: Smart, disciplined politician. Effective governor. Non-polarizing figure fanatically committed to an inclusive message NiNis respond well to. The youngest in the field. Focused on avoiding controversy and dodging bullets. Excellent poll numbers in his home state. Very nearly endorsed by Caracas Chronicles, although we’re not quite there yet.

Con: Not the most exciting speaker. Born with a silver spoon in his mouth. Can come across as cantankerous. Not as well known in the boonies. Youth may turn off older voters.

The deal: Still the frontrunner by some distance. Guy most likely to unify the opposition, rally NiNis and beat Chávez. Nomination is his to lose. 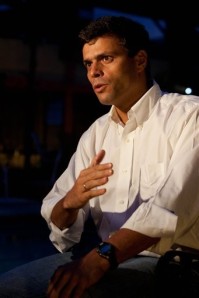 Pro: Born talker, fearsome campaigner, could sell ice to an eskimo. Slick communications team. Has thought about the issues. Understands the importance of going to far away places. Beautiful smile. Very smart. Young. The ladies love him.

Con: Can’t run, barring an unlikely CIDH-ex-machina solution. Not a team player, worrying caudillistic tendencies. Thin resumé. Stinks of Cisneros money. His roll-out has not been seamless. May be trying to appeal to the Twitter crowd a little too hard.

The deal: It’s a testament to his fearsome public communications skills that he’s unarguably top tier even though he’s technically not even allowed to run. CIDH’s ruling is expected August 31st now. My crystal-ball says they’ll order the Venezuelan state to lift his disqualification, the state will ignore them, much huffing and puffing will ensue…and in the end the MUD’s primary organizers won’t allow him to register. But stranger things have happened.

Con: Zuliano – the nation has never elected one, and hasn’t come even close to doing so. Unknown outside his base. Boring public speaker. A younger, hunkier, less experienced version of his mentor, Manuel Rosales. Virtual anointment by Rosales in a rambling speech will probably hurt more than help. Tendencies to abuse his power is an issue. Strong adeco vibes.

The deal: Working hard to rally the neo-Adeco/post-Adeco tribe, and having some success at it. Will start to really worry HCR if Acción Democrática honcho Henry Ramos Allup throws his weight behind him. Viewed by many in the opposition as the only one who can stop Capriles.

Pro: Tireless politician, a darling of the radical opposition who can also attract centrist votes. Good at the old-style populist harangue. Adaptable, quick thinking Pol. You close your eyes and you hear CAP.

Con: Adeco roots. Comando National de la Resistencia branches. Strong whiff of the jurassic about him. Chavismo would assail him for being CAP’s dauphin. You close your eyes and you hear CAP.

The deal: Only member of the old guard with a real chance, he’ll nonetheless come under strong pressure to hop onto the Pablo Pérez bandwagon. The emasculation of his office has left him with little to show for his years as Mayor-At-Large.

Pro: Excellent public speaker. Independent from party machinations. Seems to be laying the groundwork for a proper campaign organization. Very smart. Easy on the eyes = lots of free media. The only female in the group.

Con: Thin resumé. No party machinery. Visited Pedro Carmona at Miraflores. Visited George W. Bush at the White House. Upper-crust accent and body-language may not play well in Venezuela’s barrios and rural areas. Faces deep-seated prejudice against beautiful women in positions of power. The only female in the group. 2004 Recall Referendum debacle still tying her down a bit.

The deal: She’s really on tier 1.5. She should be doing better than she is, and with the right amount of pixie dust, she could run away with the thing.

The deal: A cypher. There’s no sign that he’s really running, but he could totally scramble the race if he decides to spend big. Has been selling us beer and mayonnaise for years, so why not presidents?

Con: Badly distrusted by right-wing opposition. Too far left to win a primary. Former chavista ties make him ariascardenas-y. Chavistas view him as a traitor, which may well land him in jail.

The deal: Still one of the most intriguing figures in Venezuelan politics. Almost certainly won’t run: more kingmaker than dark-horse.

Pro: Tachirense. Has a real base of support.

Con: Old Style politico. No name recognition or party machine outside his state.

Would take votes from: Capriles, MCM.

Pro: Image as a pragmatist. Smart guy with a proven – if regional – party machine.

The deal: Another of these old pols who just can’t give up the dream no matter how desperately slim their chances are.

Would take votes from: His son, maybe.

Con: Right wing extremist. Highest-profile endorsement is from Luis Alfonso Dávila. Lazy campaigner. Positively Paleozoic. Was past his prime even in 1993. So out of touch with normal Venezuelans it makes your eyes water.

The deal: Former enfant terrible of the ancien regime, yet still a part of it. Briefly jailed last year for talking crazy. Campaign = Raging, raging against the dying of the light.

Con: People tend to assume he died years ago. It’s as though Michael Dukakis thought he had a chance in 2012.

The deal: The runner-up in the 1988 election, he couldn’t win at the peak of his powers. Classy guy, but the definition of someone over the hill in today’s Venezuela.