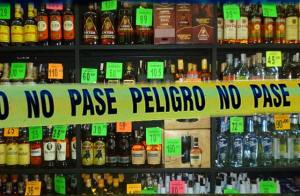 The ten-day ban on selling alcoholic beverages, ordered (and later extended) by decree as part of the national mourning period caused economic losses for liquor stores and booze distributors.

Now looks like it’s coming back for both Holy Week and the April 14th election.

The sector was already facing difficult times after the recent devaluation forced prices up.

Now, the prolongued sales ban has made inventories pile up and could even put some stores out of business. A delegation of liquor store owners met with the Interior Ministry and have asked for a legal reform to have more working hours to help recover their losses.

Another complaint has been how the Ley Seca is sometimes implemented at very short notice: last Carnival, Interior Minister Néstor Reverol said there was no need for it. But 24 hours later, he simply changed his mind.

The ban didn’t help in reducing criminality numbers during the ten days it was in effect.

On a related note, Brazilian brewing company Ambev told workers of its Barquisimeto factory that all operations there will be shut down, as Brahma beer will leave the country.

UPDATE: The “Ley Seca” will be back for four days of the Holy Week (Palm Sunday, Holy Thursday, Good Friday and Easter Sunday). The remaining days sales will be time limited.