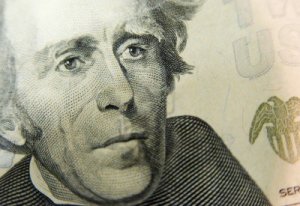 The Leader was cross. His flagship policy, the one he’d staked his reputation on, the one he’d learned from his revered predecessor, the Timeless One, could not be made to work. From the Timeless One he had learned that this policy, above all others, would break the cold grip of capitalism, delivering the workers’ nirvana they had dreamed of for so long.

It consisted of selling people $20-bills for ten bucks.

Try as they might, they just could not keep those shelves stocked. The long suffering pueblo would queue up for hours on end for a chance at the revolution’s promise, but more often than not their long wait was rewarded with an empty shelf. Stores did what they could to try to stretch out the supply, posting little notices reading “$20-bills, max 2 per customer. Price = $10.” And the government made titanic efforts to bring in more and more $20-bills, flooding the market at huge expense. And yet, try as they might, they just couldn’t seem to keep enough $20-bills on hand to sell to people who turned up wanting to buy them!

The problem vexed the Leader. Stumped him. Yet, deep down, he knew what was really going on.

And so the outlines of a plan began to form, dimly, in his head.

“If only we could crack down on them…them, the evil capitalist hoarders who wage war on our revolution, buying up as many $20-bills for ten bucks as they can lay their grubby little paws on even if they don’t need them!”

“Yes,” the leader thought, “that’s what it will take…an iron hand against this scum! Mobilizing all the resources of the state to break the back of this shadowy conspiracy determined to bring down our Revolution. We need to centralize that effort right here in the Presidency, with me at the helm! We must smash their fascist conspiracy mercilessly! Only then will we be able to make sure everyone has access to a steady, predictable supply of $20-bills at a stable, revolutionary, solidary price of ten bucks each! Then the $20-bills will never run out!”

“Get me the president of Colombia!” he barked to an assistant, his mind swimming with possibilities.

“Once we’ve broken the back of the  conspiracy that’s been foiling us at every turn,” he thought, “we’ll need plenty of fresh new $20-bills to keep our market supplied. One never likes to do business with the reactionaries, but at times like this it can’t be helped.”

The edecán handed him the phone.

“Juan Manuel, good news! Now that we’re getting tough on the saboteurs, we’re going to need plenty of those lovely $20-bills you seem to have in Colombia. Send me a shipment, $600 million worth, post haste!”

“That,” he thought, “that will show the conspirators!”