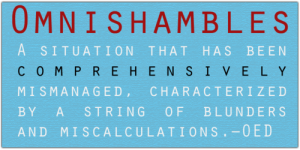 Having initially announced that a sum roughly equivalent to all of Venezuela’s oil income would be allocated to private sector buyers via SICAD, he had to backtrack later in the day, clarifying that SICAD wouldn’t dish out $900 million a week but rather $900 million total, starting with $100 million this week.

It was an Austin Powers moment in reverse – from an absurdly large number to a ridiculously low one in the span of a single correction.

For reference, the old, failed SITME system was pumping $175 to $270 million dollars a week into the economy last year and that wasn’t nearly enough to keep the black-market rate within some reasonable striking distance of the Official Exchange rate.

Now, after months and months building up pent-up demand, Maduro munificently offers up $100 million a week for SICAD, for about two months. (And, btw, they insist on calling SICAD an “auction” mechanism – don’t be fooled, it’s no such thing.)

Of course, fixating on the dollar amounts to be made available through SICAD is missing the point. The underlying exchange rate policy with a fantastically overvalued bolivar made available mostly to state importers while an illegal, black-market dollar skyrockets and a BoP crisis slowly brews in the middle distance is fucked up beyond all repair. The various policy patches applied over the years are comically mismatched to the task at hand (unless, as I’ve come to believe, the real task at hand is actually to destroy the private sector completely.)

Tossing $900,000,000 into the SICAD pyre from now til Christmas does nothing to change any of that.

In totally unrelated news, the black dollar jumped to Bs.45:$, while inflation climbed to 4.4% in September alone, standing just shy of 50% over the preceeding 12 months. ‘tamos chévere.